A simple switch is replaced by a line of dominoes in this unusual lamp by London design duo Glithero, meaning a chain reaction is required to turn it on.

The Domino Light is accompanied by dozens of conductive copper dominoes. You can arrange the dominoes in any configuration you like, as long as the first and last domino meet up with the copper strips embedded into each side of the lamp base.

These copper strips are referred to as the "rocker" domino, the first domino that starts the rally, and the "receiver" domino, the last one in the chain.

After the rocker is tipped, a domino effect ensues. The electrical circuit is completed once all the dominoes have fallen, with the last one landing on the receiver at the end.

The design intends to expose the hidden technical process behind the product, which is a standard electrical circuit, made up of a power source, two conducting points and the lamp.

"With so much technology in our lives it is easy to take for granted that even simple things such as turning on a light are made possible by the physical properties of materials," said Glithero co-founder Tim Simpson. 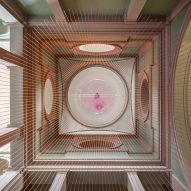 The Domino Light was designed for an exhibition at the Design Museum called Reconsidering Canon.  It saw nine designers given briefs by Kingston University students, at an event during London Design Festival.

Romana Funkeová asked Glithero to consider the moment leading up to the lamp illuminating. This led the studio to explore how a light could be switched on.

The designers chose to use a domino rally to make it less instantaneous and to create a more tangible relationship between electricity and materials.

According to Simpson, he and Glithero co-founder Sarah van Gameren designed the lamp to loosely resemble a tiered trophy, wanting the interaction with it to be about play and reward.

"We chose to incorporate a classic Edison type bulb because we love the symbolic power of the image of the light bulb coming on. It is used as a visual metaphor for the moment our mind forms an idea or has a eureka moment," Simpson said.

The main body of the lamp comprises two perpendicular stilts, topped with a plinth-like block that supports the naked lightbulb. The gap between the stilts can be used to stack any dominoes not in use.

Glithero chose acrylic for the body of the lamp, for its resemblance in touch and feel to original Bakelite and bone dominoes, and also for its insulating properties.

The studio previously explored the relationship between design and time in another project – a kinetic installation that extended across six floors of the V&A museum. The Green Room took the form of an "abstract clock" made up of a series of neon-coloured silicone cords, which all joined to a motorised revolving arm.