Map enthusiast and researcher Kerim Bayer has drawn from his collection of 1,366 maps to create a graphic-design book containing 5,180 thumbnail images.

Bayer made the Map Section book for the Istanbul Design Biennial 2018. By deconstructing the large-scale maps, he hopes that designers will able to treat the book as an abstract design resource.

"Deconstructing them really did help me personally to double down on my interest in the graphics, in reducing them to their empirical elements and appreciating them mainly for their beauty," Bayer told Dezeen.

"It's certainly not that I don't care about their other aspects, I want to learn more about those as well, but I think this approach fit particularly well with the School of Unmaking [one of the design biennial's venues], in which the project was housed."

The book contains 5,180 thumbnails that were randomly cropped, using a custom piece of software, from 1,366 maps in Bayer's archive. His collection is primarily focused on 19th and early-20th century scientific, transportation and planning maps.

Deconstructing the maps takes away their original purpose, and highlights the graphic and design elements of the maps, which are usually viewed as an informational resource.

"Although presented in a book the size of an atlas, it contains not maps of countries but maps of the graphic devices we use to translate and produce spatial information: lines, dots, colours, symbols, illustrations, shading, text, insets, hachures, legends, grids and contours," says Bayer in the book's introduction.

Bayer initially tried to pick the thumbnails himself, but he found that he was highlighting some maps more than others. He also found that he was pushing some graphical elements and eliminating others due to how they would appear in print.

Instead he chose to randomly select the images to remove a layer of bias form the book. 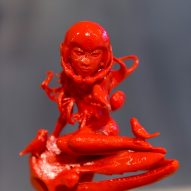 "Randomisation felt more honest, and it frequently delighted me with selections that I wouldn't have made myself or ideas that would never have occurred to me on their own," said Bayer.

"For the purpose of highlighting the graphics of the maps and providing a resource, which is the mission of the project was anyway, randomisation worked just as well, if not better."

Bayer believes Map Section has turned his collection into a useable design resource for the first time.

"I've been looking for a way to better relate to my own maps for a long time, he said. "Maps always have been a learning tool, even if I don't necessarily fully yet understand how. They've also been a resource and an aide for learning a great many other things."

"Our discussions with Jan Boelen, the curator, concentrated on how my collection was a strong resource but was underutilised, Bayer continued.

"I knew I wanted the project to be representative of the collection as a whole, be useful as a resource, and be analog, presented with no technology other than printing, which is probably the one attribute that is common to everything in my collection. We positioned it as a sort of book of books or atlas of atlases within a school of schools, so to speak."

Dezeen is media partner for the fourth Istanbul Design Biennial, titled A School of Schools.

This edition is curated by Belgian curator and educator Jan Boelen, who recently stated that the use of recycled plastic in design is "bullshit", and explores the future of design education.

Also at the biennial, Pinar Yoldas created an exhibition of designer babies that are based on the characteristics of Greek gods and goddesses.