Brazilian firm Bloco Arquitetos has completed a white house in the country's capital, comprising geometric blocks that create an interplay of shadow and light.

Morrone House is a two-storey family home in a residential neighbourhood close to the Plano Piloto administrative area of Brasília.

Based in the city, Bloco Arquitetos Associados designed the house with an outdoor entry hall, and multiple skylights and indented spaces. Its top portion is offset from the ground volume, creating a tiered design.

Flanked by houses of similar height, Morrone House's minimal design and stark white exterior contrast with its neighbours to create a strong aesthetic.

"Due to the massive buildings of the neighbours, we decided to prioritise the inner visuals, alternating constructed spaces and empty spaces, increasing the amount of natural light into the house," said Bloco Arquitetos.

The studio sought to make the most of the lot and constructed the house across the full buildable area. "From this point we subtracted parts of the volume, creating five main voids," the team said.

The first "void" is in front of the house on the ground floor and incorporates an existing pequi tree – a species protected by law – as part of an internal garden.

This courtyard is framed by the outdoor entryway, a guest room and a two-car garage.

At the centre of the home, the second "void" works as a lightwell for a living room, where sliding glass doors lead to a patio, outdoor kitchen and swimming pool.

Completing the ground floor is a dining area, a kitchen and bathroom. A white marble staircase provides access to three bedrooms and three bathrooms on the upper level.

The third is a roofless extension of one of the bathrooms, which features an outdoor bathtub, while the fourth houses the main entrance of the house.

The fifth and final "void" partially covers the outdoor pool and creates a shaded area along the patio.

Outdoor steps lead to a rooftop terrace, while the rear of the property has a grassy lawn surrounded by bushes to soften its construction.

Much of the home's interior decor is minimal, in line with its exterior. It features warm wood floors and white walls, while terracotta tiles are used for outdoor areas.

Bloco Arquitetos has completed another house in Brasília with similar "voids," known as Cora House, while the firm's Casa Vila Rica on the outskirts of the city features concrete ribs that extend across brick walls. 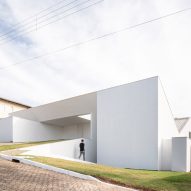