Blocks of red sandstone cover the volumes of a new design museum designed by Álvaro Siza and Carlos Castanheira on the Chinese Academy of Art campus in Hangzhou, eastern China.

The 16,000-square-metre museum was commissioned to house the fine art college's already sizeable collection of pieces, which had been bolstered by the acquisition of original pieces from the Bauhaus School.

Portuguese architects Siza, a Pritzker Prize laureate, and Castanheira, designed the building to fit the only large area of land remaining on the Chinese Academy of Art's (CAA) campus on the outskirts of Hangzhou, a triangular plot on the southeastern edge at the intersection of two roads.

Most of the museum's exterior is clad with Agra Red sandstone, with insets and internal facing walls covered in a contrasting white marble.

Different levels and angles create an angular form that changes depending on the angle the building is viewed from. Overhangs shade the entrances, and the flat rooftops in the middle are covered with grass to form a rooftop garden. 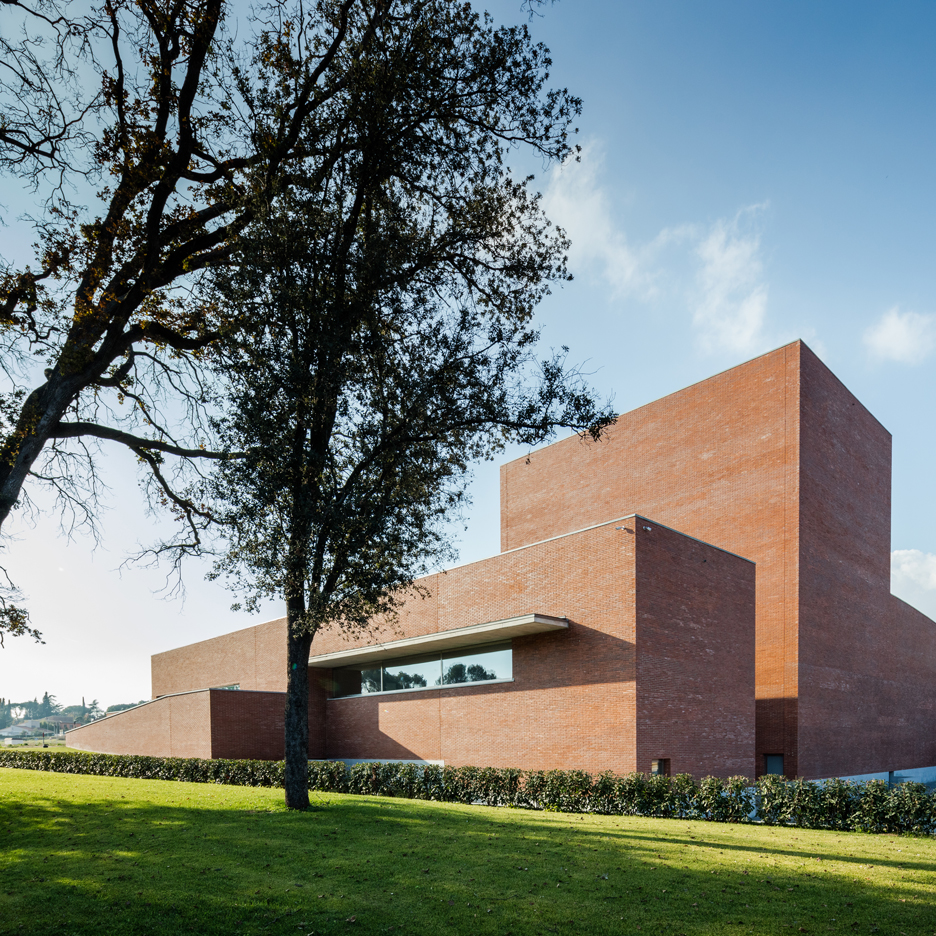 At one end of the building's longest side the rooftop has a rectangular viewing platform paved in red sandstone with sweeping curved railings. A white pathway leads across the lawns of the central roof and ramps lead upwards to the terrace.

Inside the International Design Museum of China the display areas and facilities used by the arts school are spread across multiple levels.

Siza and Castanheira arranged the public areas, temporary exhibition halls and auditorium on the ground floor, and a cafe facing out onto the central courtyard. A mezzanine level provides access to other spaces, including the ramp link to the roofs.

The top floor of the eastern-facing volume houses the Bauhaus collection in a permanent exhibition space.

The upper floors of the south facing volume contain workshops for young artists, along with administration and infrastructure areas. The archives and technical areas are located in the basement.

Siza, who won the Pritzker Prize in 1992, built a theatre in Barcelona from red bricks that also played with different volume heights and ramps. The venerated Portugese architect recently completed a simple chapel in southern Portugal from perforated bricks covered with limestone render, and realised a church from intersecting white concrete forms in Brittany, France.

He previously collaborated with Castanheira on the Mimesis Museum in South Korea, which featured a flowing concrete wall that wraps around a central courtyard.