New York designer Joe Doucet has created a collection of knobbly 3D-printed homeware for an exhibition at the city's Cooper Hewitt museum.

The set of greyscale cutlery, cookware, serving and storage capsules was designed by Doucet for the Tablescapes: Designs for Dining showcase at the Cooper Hewitt Smithsonian Design Museum.

The homeware series is intended "to represent dining in the 21st Century" and was "designed with limited resources in mind", according to a statement from the designer.

The vessels were created to perform multiple functions for food preparation and service. For example, lids can be used as plates and trivets, while sealing the bowls to keep contents fresh.

"By creating hybrid vessels, which act as cooking, serving and storage for food, we eliminate the need to use separate items for each step and avoid wasting potable water to clean each item between uses," said Doucet. 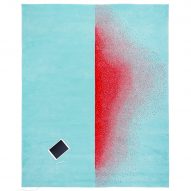 Another aspect of the designs are bumps that surrounded most of the bowls and pitchers, which provide grip.

The knobbly pattern is also intended to spread heat evenly when cooking, then quickly dissipate the warmth during serving.

The entire prototype collection is 3D printed using two different polymers from Shapeways — a Dutch-funded New York company, which has also lent the equipment to demonstrate the printing process to the museum exhibit.

"They are envisioned to be in 3D-printed steel and 3D-printed glass in the near future, but the prototypes were made with current commercial technology," Doucet told Dezeen.

The fabrication technique allows utensils to be customised to the user, in both scale and depending on which hand they prefer to use.

The prototypes were commissioned by the Cooper Hewitt – located on Manhattan's Upper East Side – for Tablescapes: Designs for Dining, which is on view until 14 April 2019.

Doucet's experience in 3D-printing aligns with his design brand Othr, which he co-founded with Dean DiSimone and Evan Clabots in 2016.

The designer has created his own pieces for the 3D-printed product range, including way-finding running gloves, and also enlisted names like Claesson Koivisto Rune, Philippe Malouin and Yonoh to add to the collection.

Photography is by Donatello Arm.