Its simple shape comprises a hemispherical dish and two flat vertical panels, which stabilise the rounded base and provide a handle.

One sheet kisses the bowl's lip, while the other sits perpendicular to bridge the gap between the two where the container curves away.

"We focused on those types of connections, which are often invisible to the untrained eye," said Malouin, who is based in London.

"But when you stop and focus on the object and really look at it, you find out how interesting and intricately made it actually is."

The bowl can be 3D-printed in either steel or porcelain, both with dark metallic finishes. It follows the designer's Connection Vessel, a small steel container made in the same way, that featured in Othr's debut collection.

Othr was founded by Joe Doucet, Dean DiSimone and Evan Clabots, who are aiming to "disrupt the current supply chain involved in producing goods" with 3D printing. 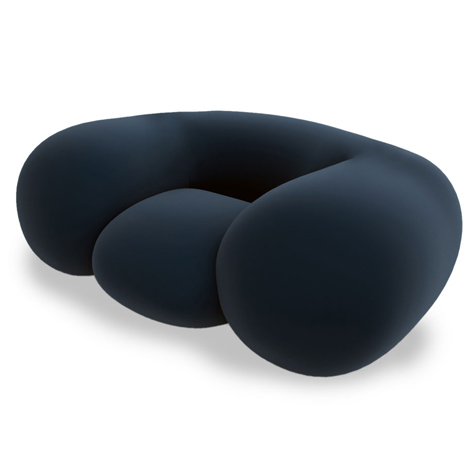 The goal is to release new items every fortnight, a feat enabled by the quick development times possible with the technology.

Doucet, DiSimone and Clabots follow designers including Stefano Giovannoni, Sebastian Wrong and Matteo Thun, who all launched their own brands during Milan design week earlier this year.

Malouin graduated from Design Academy Eindhoven and set up his studio in 2009 after working for British designer Tom Dixon. His recent work ranges from an installation of swings at a Milanese palazzo to a collection of geometric planters.

The Connection Bowl is now available on-demand from Othr's website for consumers in the US and Canada, with shipping outside North America expected later this year.