Georgica Cove is located on a waterfront property in East Hampton, an affluent village on the southern side of New York's Long Island.

It was designed for a couple who wanted a cosy home that was ideally suited for just the two of them, yet could also accommodate visitors. "With their love of entertaining, the house had to grow on busy weekends to accommodate their children, grandchildren and guests," said local studio Bates Masi Architects in a project description.

To create an intimate yet spacious home, the team turned to vernacular building traditions. For centuries, the area was dominated by farms established by English settlers. A common building typology was the "connected farm", which consisted of a main residence linked to smaller structures that were added over time. Each volume, while sharing a design vocabulary, had a distinct use.

"The architectural style of the house was applied to subsequent buildings to unify the assembly, but partitions within provided the necessary separation between uses: house to kitchen, kitchen to shop, and shop to barn, for instance," the team explained. "One volume was often offset or rotated from the next to provide greater access to light, air, and privacy from the other functions."

The connected farm typology served as a model for the Georgica Cove project. Totalling 6,500 square feet (604 square metres), the residence is composed of several rectilinear volumes topped with pointy roofs.

One contains the master suite and an office, while another encompasses guest rooms. A third volume houses an eat-in kitchen and family room, and a fourth contains a formal living room and dining area.

"The spaces are arranged around a courtyard to create visual and physical connections between them, but those connections can be broken by large sliding doors," the studio said.

Each structure has its own mechanical system, enabling it to be "shut down" when not in use. "This allows the livability of the house to expand and contract whether the couple is alone, hosting dinner guests, or has a full house of overnight guests," said Bates Masi.

Similar to connected farms, the home features a limited palette of materials. Inside, rooms feature contemporary decor and earthy colours. Oak floors and wooden cabinetry were used throughout in order to create a sense of unity.

On the exterior, cedar shingles – which are ubiquitous in New England – were scaled up and used to cover walls and roofs.

Cedar was also utilised to create screens that provide privacy and filter light. Ample glazing was incorporated into the western elevation, providing views of the water.

The entire home sits atop a marble plinth filled with sand, which elevates the dwelling above the floodplain while also forming drywells that can handle stormwater runoff. 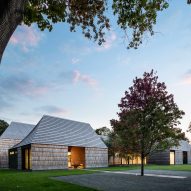 By using a historic farmstead layout, Bates Masi was able to create a modern dwelling that not only honours the area's heritage but also meets the homeowners' shifting needs.

"The design repurposes the historical typology of the connected farm to suit the very timely needs of the site and the family," the team said. "By acknowledging the area's history and tradition of building, this home is an evolution of its cultural expression."

Based in East Hampton, Bates Masi is well known for designing buildings on Long Island that reference vernacular architecture. Its cedar-clad Atlantic dwelling was modelled after a historic lifeguard station, and its Underhill residence features simple forms and materials that were informed by a Quaker settlement.

Photography is by Bates Masi Architects.