Portuguese architect Nelson Resende has designed an office for his architecture studio on the outskirts of Porto, comprising a pair of cuboids and a cylinder.

Resende created the building to be capable of housing two autonomous offices that could be linked to function as a single space if required.

He designed the office as a cluster of basic forms that appear distinctly separate but are subtly connected at the points where they touch.

"The building is the result of the juxtaposition of a series of pure, little-tamed volumes, linked by necessity, but assuming its own identity," the architect said.

The studio is reached by a paved path that rises gradually up from the street. A concrete courtyard slotted in between the two offset rectangular structures marks the entrance. 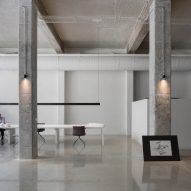 Both of these volumes have corners spliced away to create sheltered porches in front of doors leading into the offices.

At the point where they touch, a bridging section contains a corridor connecting the two rooms.

The third structure towards the rear of the site is a cylindrical meeting room with bookshelves wrapping around its inner surface.

A large glazed door incorporated into the wall allows the room to extend out onto a simple deck.

The offices are bright and simply decorated, with white-painted walls and smooth concrete floors.

Skylights ensure plenty of daylight reaches the interiors, while the windows provide views out across the agricultural landscape.

Wooden details such as door handles, window benches and dividers incorporated into the fitted cabinets introduce a warm tone and texture to the otherwise neutral spaces.

The office is situated in an area dominated by agricultural activity. Its setting provides views across the neighbouring fields, which constantly change throughout the year as the crops are tended and harvested.

The building itself is also intended to change in appearance at different times of day and in different seasons, as the angle of daylight falling on its facades shifts.

Other studios that architects have recently designed themselves inside one in Belgium by Klaarchitectuur, built inside a dilapidated 17th-century church, and one in the English countryside by Stonewood Design, which doubles as a deer-watching hide.