A car sunroof influenced the skylight that tops this small angular office, which design-and-build practice Knowhow Shop has completed to accompany its woodshop in Los Angeles.

Kagan Taylor and Justin Rice – who founded the studio in 2010 – approached the project as an opportunity to experiment with their craft. "It was a labour of love," they told Dezeen.

The duo drew on techniques used for other small-scale works, like furniture design, boatbuilding, car manufacturing and film sets.

"Lighthouse is a micro-building designed and built like a piece of furniture," said the studio in a project description.

"We discarded typical details and assemblies in favour of new methods of construction from the ground up," the team added. "The result is a project designed to test our craft in materials and our perceptions of space."

All elements were fabricated on site, including the faceted white walls, which are made up of irregularly shaped panels. 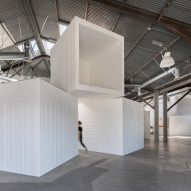 Each angular piece was cut from structural insulated panels – a building material comprising foam insulation sandwiched between flakeboard. The exterior was then clad in matching fibreglass panels that the studio coated in a white finish typically used to protect yachts.

These were the fixed together with hardware that is more commonly used in the film industry, according to the studio.

"This is not a project that we would have been able to hand off to a contractor to execute, so we bypassed the normal methods of architectural production, and relied on the most experimental potential of our design-build model," said Knowhow Shop.

Among these is a roof light, which borrows technical details from car sunroofs, a window, and a glazed front door that has no right angles.

Rather than building foundations, the studio elevated Lighthouse on industrial casters so that it can be moved around the yard. This way, it can help accommodate large material deliveries, or different uses of the outdoor space.

A small step at the door bridges the gap to provide access inside. Wooden wall panels line the interior, while a built-in wooden desk runs the perimeter, creating ample workspace on top and hiding cabinets underneath.

Storage is also provided by a bookshelf on the rear wall, which has an almost triangular shape that narrows towards the top, to follow the shape of the walls.

Knowhow Shop is among a number of architecture and design studios that have completed a workspace for themselves.

Others include London firm Selencky Parsons, which employed a similarly experimental approach for a small space.

Photography is by Stephen Schauer, unless stated otherwise.