Design is a key driver of business success and is "the only way that companies can stand out from the crowd", according to a report by management consultancy McKinsey & Company.

The report, the first the giant consultancy has conducted into the value of design, says that the discipline can help firms that embrace it holistically rather than seeing it as a tool to make products look pretty.

"While design was once largely thought of as a way of making products more attractive, it is now a way of thinking: a creative process driven by the desire to better understand and meet consumer needs" said McKinsey.

"Findings from the survey suggest that for a business to benefit, it is necessary for top management to accept design and embrace it early in the process."

Launched today the report, titled The Business Value of Design, is based on studies of 300 listed companies around the world, including 30 face-to-face interviews and analysis of over two million financial data points.

The launch, held in New York, was streamed live by Dezeen and can be watched here.

McKinsey claims the report contains "the most extensive and rigorous research undertaken anywhere" to map the business impact of design. It concludes that firms that embrace design generated 32 per cent more revenue and 56 per cent more shareholder returns than rivals over a five-year period.

"The companies that achieved the best financial returns in the McKinsey survey were those with a bold, user-centric vision that had embedded design in the planning at the top and used robust design metrics to monitor customer satisfaction," the consultancy said.

McKinsey's research found that many companies struggle with design. Ninety-five per cent of design leaders do not feel they can make objective decisions, while 66 per cent fail to share prototypes with end users, and half do not consider users when developing new products and services.

Firms that hive off their designers into separate departments will struggle, the research suggests.

"In the tired caricature of traditional design departments, a group of tattooed and aloof people operate under the radar, cut off from the rest of the organization," the report says. "Our research suggests that overcoming isolationist tendencies is extremely valuable."

The report has been compiled by a new division called McKinsey Design, which will advise firms on design strategy. "Good design is good for business," said Ben Sheppard, partner at McKinsey Design. "It's the only way that companies can stand out from the crowd in a sustainable way."

Sheppard defined design as "understanding the needs of your users, then creating products and services that meet those needs".

Research quantifies what designers have been saying for years

Design professionals have long understood the value of design, Sheppard added, but have lacked the quantitative and qualitative data to back up their views and convince senior management.

"Many of the design actions encouraged by the research will serve to reaffirm the beliefs of designers," he said. "However, for the first time our research provides an independent, quantified fact base to support the importance of such actions."

Equality is good for the bottom line, say speakers at Dezeen and RIBA's diversity event

Sheppard said McKinsey's interest in design has been driven by clients, who are increasingly asking how to embrace the discipline following a decade in which developing digital strategy and controlling costs have been the key business obsessions.

"Most questions over the last three/four years have been about design," Sheppard said. "Design has gone from being a middle-management topic to a senior management topic."

McKinsey has responded by building a design-consulting division of over 350 people, including employees of California design studio Lunar, which the consultant acquired in 2015, and Swedish studio Veryday, which it bought in 2016.

The Business Value of Design report contains insights from five years of research, which has been distilled into a metric called McKinsey Design Index, which will be launched online next month. Companies will be able to use this to benchmark their design capabilities.

The index contains a dozen "design actions" that are shared by the most successful companies. These actions are grouped into four themes, which McKinsey calls more than a feeling, more than a phase, more than a department and more than a product.

In a telephone interview, Sheppard explained the themes to Dezeen:

More than a feeling

"'This is about the companies being analytical," he explained. "It is about them measuring and driving design with the same rigour as revenue and costs."

More than a phase

Design is a continuous process rather than a phase, he added, explaining the second theme.

"This is about continuous iteration. So, if you're just locking your design, then it hurtles unchangeably to launch, that's a high-risk strategy, rather than continuous consideration with your users."

More than a department

More than a product

Finally, companies need to look beyond product and employ design in every aspect of what they do.

"The companies that are performing best are the ones that didn't just say ‘well we've historically been a product company so we'll remain a product company'," Sheppard said. "They were the ones that said let's start by drawing a customer journey, rather than with a spec from engineering. Let's work out what the customer actually needs and do what the customer is asking of us." 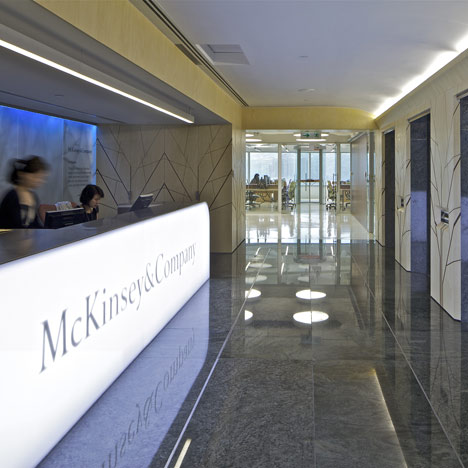 Design "no longer a luxury"

"The final results of the survey suggest that senior executives no longer have the option to treat design as a luxury," McKinsey concluded.

"Across an array of industries including consumer packaged goods, medical technology, and retail banking, the research proves the business and financial value of design."

Main image is by Philippe Ruault.