The result of the public vote to scrap Foster + Partners' partially built airport for Mexico City has not gone down well among local architects, who have described the referendum as an example of the country's "political issues and corruption".

A host of architects based in the Mexican capital have spoken out about the decision, which president-elect Andrés Manuel López Obrado declared binding after the referendum he called took place earlier this week.

70 per cent of participants in vote favour of cancelling the $13 billion New Mexico City International Airport midway through its construction, but only one in every 90 registered voters took part.

"The outcome confirms Mexico is lacking democratic processes," architect Fernanda Canales told Dezeen. "It's an example that reveals projects in Mexico are based on short-term, personal and political issues and corruption."

"It was not a public referendum, it was fake, completely against the law," she added. "The Supreme Court should approve it and the National Electoral Institute should be in charge. Instead, it was not a transparent process."

It was not a transparent processFernanda Canales

López Obrado made the public referendum on the project a key agenda of his presidential campaign, which he ran under the opposing leftist National Regeneration Movement, Morena, earlier this year.

Canales said that political rivalry, rather than public interest, was behind the move. 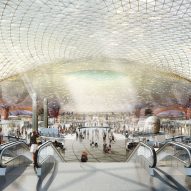 "[The referendum] does not reveal the desires of the population, but rather of the future president and battles among political parties," she said. "It only alerts us that decisions will not be based in information, research, long term views, sustainable development, economy... but rather on personal interests."

Echoing this sentiment, local architect Christopher Koehn told Dezeen that "the main reason for López Obrador to take [the airport] down is to justify himself". He added that placing the fate of the major infrastructure project in the hands of the general public was problematic.

"Political or public referendums shouldn't be part of this decision," he said. "Most voters don't really know about urbanism, city planning or architectural design, or in this case the real airport necessities."

Taller de Arquitectura partner Gabriela Carillo agreed. "A decision at that scale shouldn't be taken by people without information – and I'm included there," she said, adding that the situation was "very complex".

Isabel Martínez Abascal of Lanza Atelier told Dezeen that although the vote was "a brave and democratic initiative", more should have been done to provide adequate information so that voters could make an informed decision.

"Recognising the right of citizens to opine should go hand in hand with providing them with the basic tools to do so," Abascal said.

"That includes technical information adapted to people who are not necessarily architects or urban planners, with a sociological approach and that considers the benefits and problems in the short, medium and long term."

López Obrador's party criticised the Foster project for its $13.3 billion (£10.30 billion) cost, corruption, and the environmental impact surrounding the site in Texcoco.

Diego Guerra, a project manager at UNAM's School of Architecture, described this rhetoric as "propaganda". 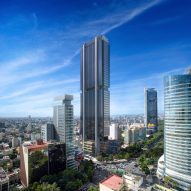 "Most of the propaganda that Morena has used to convince its sympathisers has to do with those arguments about the so called 'lake', swindling people into believing that those wetlands have ecological significance, and that 0.77 per cent of Mexico's population decided for the greater good," said Guerra.

"We are all worried, inside the school and outside, being that this doesn't adhere to any of the correct practices we work towards," he added.

A protest against the decision is being organised for 11 November 2018 at the city's Angel of Independence. Attendees are required to dress in black "as a sign of mourning".