Workers in open-plan offices have less face-to-face interaction with colleagues than those who work separately, according to research by Harvard students.

Published by The Royal Society, The Impact of the 'Open' Workspace on Human Collaboration is a research paper produced by Ethan Bernstein of Harvard Business School and Stephan Turban of Harvard University.

It states that, although companies are increasingly calling for barriers in the workplace to be removed, staff are less likely to speak to fellow employees when they can constantly see them.

Emails and instant messaging take over

They instead tend to communicate via email or instant-messaging systems such as Slack.

"Rather than prompting increasingly vibrant face-to-face collaboration, open architecture appeared to trigger a natural human response to socially withdraw from officemates, and interact instead over email and instant messaging," reads the report. 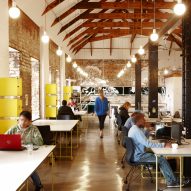 The research is based on a study carried out an anonymous company, described by the pair as "a multinational Fortune 500 company". The company was initiating a "war on walls", by reconfiguring its workspace to be entirely open-plan.

Report is based on recorded data

Bernstein and Turban asked a variety of employees – from departments including sales, human resources, and finance – to wear a "sociometric badge" for three weeks before the office redesign, and for another three-week period months after it was completed.

The badges used sensors to record when wearers were having face-to-face contact with others, speaking, listening to conversations, and moving around.

The students found that, after the re-design, workers spent 72 per cent less time interacting face-to-face. Instant message activity increased by 67 per cent, while email volume went up by 56 per cent.

"Contrary to common belief, the volume of face-to-face interaction decreased significantly in both cases, with an associated increase in electronic interaction."

Open-plan offices have been increasing in popularity for decades, although they are often criticised for making employees more distracted.

A study in 2016 by the Auckland University of Technology found that employees in open offices tend to be more un-collaborative and unfriendly. It also claimed that people who work from home or share with just one or two others enjoy better relationships with colleagues.

According to Bernstein and Turban, their report is the first to empirically measure how in-office interaction is affected by the elimination of desk cubicles and walls – rather than relying on more subjective research methods like surveys or social observation.

"Yet there is scant direct empirical research on how human interaction patterns change as a result of these architectural changes." 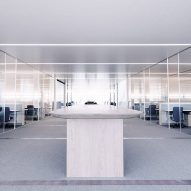 Open-plan offices also recently came under fire by employees at the new Apple Park, who said that they hated the layout of their new Foster + Partners-designed campus so much they might quit.

According to research from office furniture giant Haworth, open-plan offices can be successful, but only if they provide clearly defined spaces for both collaboration and focus work.