Angled walls, slender windows, and a Le Corbusier-influenced roof deck break up the chunky white volumes of this residence, which architecture studio Urban Operations has built into a hill in Los Angeles.

Locally based Urban Operations excavated a chunk from a hill at 4752 East Baltimore Street in the city's Highland Park neighbourhood – where Knowhow Shop has also built itself a faceted mini studio – to make way for the 2,400-square-foot (223-square-metre) property.

Three white-stuccoed volumes stagger down the site, with each detailed with various openings, recesses and protrusions to make the most of light and surrounding views.

"The design marries strategic hillside engineering with a series of stepped programmatic volumes, which are then sliced and folded at various code-generated orientations in order to produce a unified holistic design," said a project description from Urban Operations.

A series of outdoor areas across included in the residence provide each of the spaces inside with external access. 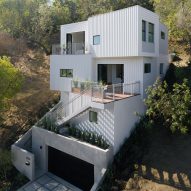 Stack House by FreelandBuck is lodged into steep hillside in LA

Among these is a roof deck that the studio based on Le Corbusier's early modernist villas, which typically included gardens on top. It offers residents vistas of the city's Griffith Park and the San Gabriel Mountains.

Another terrace is located on the second level down, underneath an opening cut into the sloped roof above. This is followed by a third courtyard on the first level, which acts as the forecourt to the home's main entrance. An outdoor staircase connects the middle storeys, while the garage for the residents' cars occupies the lowest volume.

The exterior of the residence is predominantly white, but Urban Operations chose grey stucco for the inner walls of the outdoor spaces to add dimension to the volumes.

"We used the graphite-coloured stucco, which has a similar smooth finish, in order to give the building mass more elegant volumetric properties – so that the white appears as a skin that is lifting off the underlying mass in some areas," studio founder John Southern told Dezeen.

Indented grey walls also run along the side of the house beneath a small balcony, and wrap a corner courtyard set at the top.

The studio describes the property as "a contemporary homage to LA's stylistically heterogeneous collection of hillside residences". It is among a host that optimise the city's notoriously hilly terrain, along with a lodged a stacked residence by FreelandBuck and a residence that Anonymous Architects completed for an actor.

Nicknamed Twin01, Urban Operations's property is the first of a pair for the site, with the second property intended as a variation of the first. Because of the impending neighbours, slender and smaller openings are placed along the longer walls to maintain privacy.

Most of the natural light is instead provided by the large square-shaped windows puncturing the street-facing side, along with light wells.

"The light wells, some of which are two-stories in height, are a signature of the project, since the lower living spaces are dug into the hillside and do not have as much fenestration as the upper stories of the house," said Southern.

Two of these wells are positioned above the kitchen, which forms part of the open-plan first floor together with a living and dining area. Three bedrooms and two bathrooms occupy the top level.

A number of features inside draw from the exterior of the property, such as the folded white kitchen counter and the white-painted walls. Dark details – including kitchen cabinets, porcelain tiles in the bathroom, and textiles – pick up the tone of the dark grey stucco on the outside.

These neutral finishes, which also include wire-brushed oak planks on the floor, are offset by a series of bright blue walls in the lounge and hallway.

"Accent colours were used to enhance the light wells that penetrate the volume of the house and add visual gravity to certain programmatic spaces," said the architect.