Lord's Cricket Ground has released visualisations showing two new stands designed by WilkinsonEyre, which will stand either side of the Stirling Prize-winning Media Centre by Future Systems.

WilkinsonEyre has designed the pair of structures to replace the Compton and Edrich Stands at the historic London stadium. The images were released as the ground's owners, Marylebone Cricket Club (MCC), submitted a planning application for the development.

In total the new stands will have a capacity of 11,500 spectators – 2,500 more than the existing stands – increasing the ground's overall capacity to 30,500.

The pair of three-tiered stands will be built either side of the Media Centre, which was named the UK's best building in 1999, when it won the Stirling Prize.

As the new stands are taller than the existing Compton and Edrich Stands, they will stand directly alongside the Media Centre for the first time.

Both stands will have restaurants in the central tier and will incorporate large media screens. A walkway will connect the stands and overlook the Nursery Ground.

"We are very aware of the responsibility we have to protect everything that makes Lord's so special, and we are delighted with the positive feedback we've already received from our membership," said Guy Lavender, MCC chief executive, when the plans were announced earlier this year. 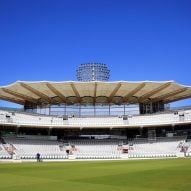 "As well as providing a significant improvement to capacity and facilities, the plans for the new Compton and Edrich stands complement beautifully the JP Morgan Media Centre, which was designed by Future Systems and is itself an award-winning building, well known to anyone who has watched cricket at Lord's."

The development of the Compton and Edrich Stands is the second phase of the major redevelopment plan for the cricket ground, masterplanned by Populous. Last year, Populous' Warner Stand was completed as the first stage of the plan.

After the Compton and Edrich Stands are developed, which is scheduled to be complete in 2021, the East Gate Building and Nursery Ground will be redeveloped between 2021 and 2027.

Following this, the Tavern and Allen Stands are scheduled to be rebuilt and the North Gate Building will be developed.

All elements of the masterplan are scheduled to be completed by 2032.