With one week to go until the Dezeen Awards winners are announced, members of the architecture master jury discuss how this year's shortlist reveals a newfound spirit of concern for both communities and the environment.

Architect and Dezeen columnist Sam Jacob stressed the potential of architecture being politically and emotionally engaged, rather than being purely about construction.

"Thinking about architecture as the production of walls is to limit its potential power on the world," Jacob said. "The fact that we can begin to think of it as a much broader, creative, politically and emotionally engaged practice is incredibly exciting."

Strelitz said that this year's crop of entries revealed an increasing interest in consulting the public on the use of buildings.

"Many people are asking the question of how a broader range of people can have more agency in how the built environment is produced and run," Strelitz said.

Rojkind, the architecture master jury chair, reflected on the human component within architecture, which helps to engage communities and improve the overall quality of life in cities.

"Architecture has the capacity to give something back to communities and add value to cities and individuals," Rojkind said. 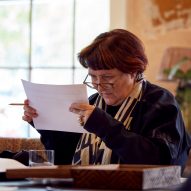 Huang stated that an emphasis on cultural events is currently a driving force for developers funding projects in cities.

"There’s a huge focus on building communities and creating events, culture and atmosphere and everybody wants to be a part of that," she explained. "I think people who are funding these projects are starting to understand the value that its bringing, now that user experience is driving developments."

Rojkind told Dezeen that thinking about the future uses of a building is vital to building better cities.

"We should not only be thinking about designing a building but also a strategy for the afterlife of the building," he said.

Mayer also touched on the afterlife of architecture in terms of its environmental impact.

"There is a new approach which includes a certain consciousness about our environment and how we produce spaces, and the afterlife of these spaces when it comes to recyclability and the flexibility of reusing it. These are all new aspects that are coming into play now," Mayer said.

Dezeen Awards winners will be unveiled on 27 November, at a dazzling ceremony that will be hosted by British comedian Sir Lenny Henry. Each winner will receive a unique trophy designed by Atelier NL.

A panel of 75 judges assessed every entry online, whittling them down to a shortlist of five entries per category, with winners emerging based on a scoring system. Three master juries – one each for architecture, interiors and design – then ratified and selected all 33 winners.