Danish design brand Hay has opened its first brick-and-mortar store in North America, hot on the heels of the dedicated e-commerce platform for the region it launched earlier this month.

Founded by Rolf and Mette Hay in 2002, the brand is expanding into the the North American market with both physical and online retail.

"The opening of the Portland store represents the first step in an exciting journey for us," said Rolf Hay in a statement.

Set in an industrial-style building typical to the area, Hay Portland has a monochrome exterior of painted white brick and black-framed windows. The brand's logo adorns the brickwork in bold black lettering, and is displayed on a portion of glazing in white.

Inside the 3,400-square-feet (316-square-metre) shop, Hay aimed to create a homey atmosphere to display its array of furniture, textiles, kitchenware and home accessories.

The open-plan space is styled with a range home-style set-ups, including areas designed to evoke a kitchen, a dining room and an office.

Partitions between these different spaces are provided by Hay's gridded New Order shelving and storage system, which the brand created with designer Stefan Diez. A variety of chairs, cups, cutlery and stacks of cushions are showcased on the shelves. 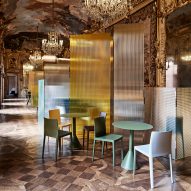 Some of the dividers left open to maintain views across the store, while others are backed to help create cosier nooks.

The brand also plans to use Hay Portland as a hub for programming that will engage with the local community.

"We share Portland's affinity for craftsmanship and creativity, and we welcome customers to Hay Portland to explore our designs in this new environment," Rolf Hay said.

"Just as excited as we are to introduce Portland and the broader American consumer to Hay's offering, we're equally excited to connect with and learn from this new audience."

Hay is part of Nine United, a private group of companies headed by Troels Holch Povlsen, and is one of the biggest Scandinavian design brands in the world.

Expansion into the US follows major success in Europe and a recent growth in the Asian market, where the brand now has stores in Shanghai, Beijing, Tokyo and Seoul, among many others.

Photography is by Chris Dibble.