Patrik Schumacher claims he does not want control of Zaha Hadid's estate, and that he began court proceedings to remove the other executors of her will to allow independent, professional executors to be appointed.

The Zaha Hadid Architects' director says his motives for starting legal proceedings to remove Rana Hadid, Peter Palumbo and Brian Clarke as executors of the late architect's estate have been "falsely reported".

He refutes claims by the trio that the legal case is for his own personal gain, and states that he does not want to become the sole executor of Zaha Hadid's estate, which has an estimated value of £70 million.

"It was falsely reported that I want to control Zaha's estate as sole executor," said Schumacher. "It was falsely alleged that my court action is about or motivated by personal financial gain."

"There has been some misunderstanding about my intentions"

Schumacher, who was named one of four executors of Zaha Hadid's estate following her death in March 2016, issued a claim in the High Court to remove the other three as executors last week.

However, Schumacher states it is not his intention to become the sole executor of the estate. He wants to replace Serpentine Gallery chairman Palumbo, artist Clarke, and Zaha Hadid's niece Rana Hadid with independent professional executors.

"There has been some misunderstanding about my intentions in the media coverage of my recent court application to substitute my co-executors," said Schumacher.

"In my capacity as executor and beneficiary of the estate of the late Dame Zaha Hadid I applied to the High Court in London for an order to replace my current co-executors with independent professional executors."

"My actions as executor are faithful to her explicit wishes"

Schumacher also objects to the suggestion made be the other three executors that the court case is motivated by his desire for financial gain.

"I have no intention to control the estate of the late Zaha Hadid, nor is my move motivated by or in any way connected to the prospect of personal financial gain," he continued.

According to Schumacher, he has taken legal action to move proceedings forward to be faithful to the wishes of his former business partner. 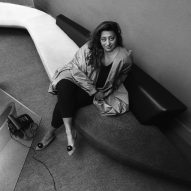 "I have been working with Zaha Hadid since 1988 and we have been in close communication every day for 28 years until her passing in 2016. My intentions and actions as executor are faithful to her spirit, hopes and explicit wishes," said Schumacher.

"Regrettably I have been left with no real choice but to appeal to court in order to move matters along constructively in accordance with Zaha's wishes."

All executors were appointed personally by Zaha Hadid

The three other executors reacted to Schumacher's High Court claims to remove them by issuing a joint statement.

"These executors were appointed personally by Zaha Hadid because she trusted them to act in her best interests," says the statement. "All three were known to Zaha for decades, one was a close family member, and the other two were very good friends."

Rana Hadid added that her aunt "would have been devastated to learn what Schumacher is doing".

This is not the first time the four have disagreed. In 2016, Rana Hadid, Clarke and Palumbo said they "totally disagree" with Schumacher's views following his controversial speech on social housing at the World Architecture Festival.