A 5,000-square-foot (465-square-metre) renovated warehouse space in Hollywood's McCadden Place has become the third location of the brand, following its first outpost in New York and a European hub in Milan.

Branching across to the West Coast marks a full circle for Apparatus co-founders Gabriel Hendifar and Jeremy Anderson, who met in the Californian city seven years ago, before setting the lighting studio up in New York.

The palette of the space draws on "desaturated sunset tones" to complement the metallic and monochrome hues of the Apparatus' lighting, furniture, and home objects. 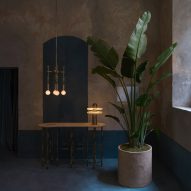 Pale hand-troweled plaster covers the ceilings and walls throughout to provide a neutral backdrop, with many decorated with groups of pendants or sconces.

Archways repeatedly puncture the plasterwork, and vary in size from two huge openings to a series of smaller arches that form an arcade.

The architectural feature evokes the paintings of Italian artist Giorgio de Chirico, who provided Hendifar with many cues for the space.

One of the large areas also resembles an outdoor yard, with a tree growing up from a huge stony planter, alongside a matching table and a velvety sofa.

Other details referencing the 20th-century painter's work are the strong shadows cast by the high clerestory windows that run around the spaces.

These openings are the main source of natural light within the showroom, which doesn't have any street-facing windows, much like the inward arrangement of the brand's Manhattan hub.

However the gridded steel and glass entrance is much more prominent than the East Coast counterpart, which is located several storeys above street level.

Two squares of gravel flank either side of the entrance in LA, among the three tonnes of the material that Hendifar has discreetly used to skirt the walls throughout the showroom.

Appartus' full range – which includes collections that drawn inspiration from the Wiener Werkstätte art movement, the forms of ceremonial objects used for ancient rituals, and most recently Hendifar's Persian heritage – are displayed across the showroom.

There are also antiques sourced from neighbouring JF Chen, and works by local artists Robert Moreland and Amir Nikravan, styled by Hell's Walsted.

Apparatus was founded by Hendifar and partner Anderson in 2012. Over the years, the duo has become influential among the design community, with their annual New York design week discos now a notorious fixture on the industry calendar.

Photography is by Wichmann + Bendtsen.