Land Rover unveiled its new Evoque car in London today. It is an update to the compact sports-utility vehicle (SUV) that the automotive brand launched in 2011.

The original Evoque is the smallest and fastest-selling member of the Range Rover family of luxury SUV vehicles.

Land Rover chief design officer McGovern claims that this success led to a design evolution, rather than a revolution, for the new car.

"The Evoque is a very important vehicle to us," he says in the movie, which Dezeen filmed for Land Rover at its headquarters near Coventry.

"It has been our most successful vehicle, selling nearly 800,000 vehicles since it was first introduced into the market. So the challenge really was, given that the first Evoque was so successful, how do you replace it?"

The new vehicle features the same distinctive sloping roofline and rising beltline that gave the original car a sporty, coupé-like appearance. But McGovern says the new design is cleaner and more refined.

"We've maintained the overall visual robustness," he says. "But when you inspect closer, it's completely different."

"There are flush door handles, flush glazing, and we've taken out finishers on the body side and on the roof. All the surfaces are more sophisticated, they are more refined. It's this reductive approach – that's the essence of it."

Customers can specify the new Range Rover Evoque with an array of technology features, including cameras that send a live video feed to the rear-view mirror.

This provides the driver with an unobstructed view behind them, no matter what is in the back of the car. 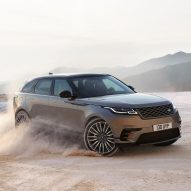 "One of my favourite features is the camera technology for the rear-view mirror," McGovern says.

"By the flick of a switch, you have an unobscured vision of everything that is behind you."

Another feature called ClearSight Ground View uses cameras mounted in the vehicle's grille. These enable the driver to "see through" the bonnet of the car by sending a video feed to a display mounted on the dashboard.

"The ClearSight Ground View technology was developed originally on a concept vehicle that we showed in New York several years ago," McGovern explains.

"Now we've managed to bring that technology to production."

Despite these new innovations, McGovern says that the success of the new design will depend on customers feeling the same emotional attachment as many felt towards the original car.

"Technologies are important, innovation is important," he says.

The Range Rover Evoque is the smallest member of the Range Roger family. It sits below the slightly larger Range Rover Velar, which the World Car Awards named as "the most beautiful car on the planet" in April 2018.

Last year Land Rover unveiled a drone-equipped Discovery to be used for search and rescue operations, while earlier this year the company launched a rugged smartphone aimed at outdoor enthusiasts.

This movie was filmed by Dezeen for Land Rover. Additional footage in the video and all the images in this story are courtesy of Land Rover.