Atelier NL founders Nadine Sterk and Lonny van Ryswyck won the Designer of the Year prize, which is given for "all-round design excellence over a body of work by an designer or design studio that has been in business for more than 10 years".

The Eindhoven-based pair have built up a body of work exploring the potential of locally sourced raw materials, including sand, soil and clay.

Their Clay Service project has produced a range of ceramics that showcase clay varieties from different locations around the Netherlands.

Meanwhile their recent project ZandGlass – for which they won the Homeware Design of the Year prize – saw them draw from their research into wild sand around the world to create a range of regionally specific glassware.

The jury praised the designers for the "consistent sensitivity throughout their work" and they way they concentrate on "local materials and responsible production practices whilst also maintaining a very high level of aesthetics throughout all their projects."

"They tackle ideas such as sense of place and geographic specificity successfully, making the conversation about sustainable practices a richer one," said the judges.

The prize sees the pair presented with a Dezeen Awards trophy that they designed themselves. Made from London clay, they were produced by hand from craftspeople at brick manufacturer Wienerberger.

Envisions was named Emerging Designer of the Year, a title awarded for the best "all-round design excellence over a body of work by an designer or design studio that has been in business for 10 years or less".

Also based in Eindhoven, Envisions is a collective of 20 multidisciplinary designers, led by Swedish designer Sanne Schuurman.

Since launching in Milan in 2016, the studio has developed a range of experimental projects, with the goal of creating new design materials. These include the timber-focused Wood in Progress projects, along with the broader Products in Process collections.

The studio says its aim is to "overthrow the usual boundaries between finished product and the creative process by showcasing everything but the end product".

Judges commented: "The quality of this studio's work is consistently high, using a playful mix of techniques and fun aesthetic qualities." 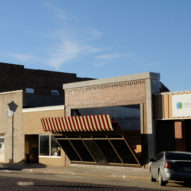 The design studio award winners were announced alongside studio winners for architecture and interiors at the Dezeen Awards ceremony in London on 27 November 2018.