Foster + Partners' plans to build a 305-metre tall viewing tower in London may be blocked, as London City Airport says the structure could impact its radar system.

London City Airport has raised concerns about the potential impact of The Tulip, which would become the City of London's tallest structure, in a letter to the planning authority.

The airport believes that building of The Tulip should not commence until the repercussions on the radar and landing systems on the airport, which is located around six miles away from the proposed tower, are assessed.

"Construction shall not commence until an assessment has been carried out on the impact of this development on the radar coverage," states Jack Berends, London City Airport's technical operations coordinator, in the letter.

"No part of the proposed development or associated construction activities shall commence until LCY is satisfied that there will be no reduction of the integrity of the current instrument landing system in use at London City Airport," he said.

Along with viewing platforms, the tower would contain attractions and an education centre. It would also have spinning gondola pods that are visually similar to the London Eye on three of its sides. 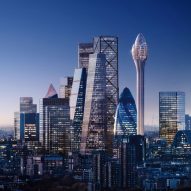 "But will it vibrate?"

The airport has also raised concerns about these moving elements.

"During this assessment it should be noted that the gondolas present will be moving and therefore may have a slightly different effect than a static element of the building," said Berends.

Designed for the J Safra Group, The Tulip is planned for a site on the plaza of 30 St Mary Axe, better known as The Gherkin, which was also designed by Foster + Partners.

If plans for the tower are approved, construction would commence in 2020, with the attraction opening in 2025.

The tower joins a number of structures in central London with public viewing platforms. It would be around one metre shorter than The Shard – London's tallest building – which has its own viewpoint. Six other new skyscrapers planned in the City of London will also include observation decks.

Renderings are by DBOX for Foster + Partners.