Norman Foster has declared that the stepped 41-storey office tower his firm has designed for New York's Park Avenue will "set new standards for workplace design", as the building tops out in the city.

The British architect celebrated the construction milestone in New York City yesterday, as a beam was hoisted atop the skyscraper – the first office tower builr to occupy a full block on Park Avenue in 50 years.

Called 425 Park Avenue, the high-rise office features a tapered steel and concrete structure, which outlines three stepped volumes that rise 724.5 feet (221 metres) to the roof. A glass feature set to be added atop later will complete the formation, and add an extra 36 feet (11 metres) to the total height.

Foster + Partners' tower joins a host of modernist skyscrapers along the famed boulevard, such as Mies van der Rohe's 38-storey Seagram building – behind which the firm's super-skinny One Hundred East Fifty Third skyscraper is nearing completion.

"The design for 425 Park Avenue emerged as a response that is respectful of its historical context, while reflecting the spirit of its own time," said Foster in a statement. "It will set new standards for workplace design and provide an enduring landmark that befits its renowned location."

Triangular steelwork knits together the three glass volumes, as they gradually recess from the seven-storey-high base to form a central section, and a final slender portion on top. 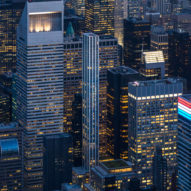 Each of the diagrids will enclose double-height planted terraces to encourage tenants relax and socialise, with the staggered arrangement designed to optimise views towards the nearby Central Park.

The firm – which won a Dezeen Award for its Bloomberg Headquarters in London last week – has placed the vertical circulation to the rear of the structure. The elevators will be glazed to provide vistas of the East River on the other side.

The concrete and steel external structure will also allow for column-free and flexible workspace layouts inside.

An amenity floor will be located in the middle volume to make the most of the park view. Here, tenants will have access to dining areas, meeting spaces, as well as a relaxation and mediation room.

"The building's design is about providing a sense of light, air and space within the dense urban environment of Manhattan – reflected in the fact that it will be the first WELL certified building in New York City," said Foster + Partners' head of studio Nigel Dancey.

Another standout features of the tower is a three-storey entrance lobby, which will adjoin a new flagship restaurant from chef Daniel Humm.

"Everyone enters through the soaring triple-height lobby, which forms the social heart of the building," Dancey added.

425 Park Avenue's topping out was documented in true Foster style on his Instagram account. It rounds off a busy few months for his architecture firm, which recently unveiled plans for a tulip-shaped viewing tower in London.

Its unusual shape has sparked much debate, with London City Airport concerned that the structure could impact its radar system. Meanwhile, architect Peter Cook claimed the structure is "not spooky enough".

Photography is by Nigel Young, courtesy of Foster + Partners.