The office, called Google Spruce Goose, is located in Playa Vista – a neighbourhood near LAX airport. The project entailed the overhaul of a large timber-framed hangar that was constructed in 1943 by Howard Hughes, the famed businessman, film producer and pilot.

Measuring 750 feet (229 metres) in length, the facility was built for the construction of the H-4 Hercules airplane, nicknamed the Spruce Goose due to its massive size and wooden structure.

The aircraft moved out years ago and is now on view in Oregon. In the 1990s, the hangar was converted into a film production facility. Google began leasing the facility in 2016 and tapped Oregon-based ZGF to transform the interior into an office.

"Given the nature of the client organisation and the rich history of the building, the project demanded a wholly unique design approach," ZGF states on its website.

The adaptive reuse project entailed the creation of a "building within a building". The team inserted floor plates that vary in shape and size. Workers circulate through the dynamic space via zigzagging stairs and elevated walkways. 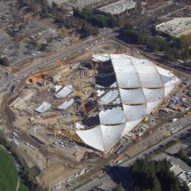 The perimeter of each floor features a "boardwalk" with either mesh or glass railings, which add to the office's fluid and open atmosphere.

"The varied shaping of each floor allows daylight to penetrate every level and maintains clear sight lines spanning the full length of the building, putting the magnitude and workmanship of the historic structure on display," the architects said.

The team also punched in new windows and skylights, and restored the hangar's timber beams.

The office is fitted with custom furnishings, colourful artwork and potted plants. Aviation themes were incorporated into phone rooms and meeting rooms, which have names like Kite and Zephyr.

"Hospitality spaces are each designed with a contemporary twist on the iconic style of a bygone era," the architects described.

Other projects by ZGF include a Stanford University power plant that features wooden accents and a large photovoltaic canopy, and a medical centre in downtown Phoenix that is wrapped in a faceted, copper-coloured screen.

Construction is currently underway on Google's new campus in Mountain View, California, which consists of rectilinear modules covered by a vast canopy. Designed by BIG and Heatherwick Studio, the Mountain View project is the first office complex that the internet giant is building from scratch.

Photography is by Connie Zhou.