Robots are programmed with traits such as impatience and confidence in an installation by designer Madeline Gannon, whose work explores the potential for humans and machines to live harmoniously.

Gannon – who last year charmed visitors to the London Design Museum with Mimus, an industrial robot that played with passers-by like it was a 1200-kilogram puppy – worked with 10 robots for the new installation, titled Manus.

This time the machines, standard ABB IRB1200 -5/0.9 industrial robot arms, act like pack animals. Lined up in a row and controlled by one central "brain", they move as people walk in front of them, each robot with its own idiosyncrasies.

"The robots in Manus don't look like and they don't act like us – but they can still connect with us in meaningful ways," said Gannon, who has a PhD in computational design from Carnegie Mellon University and co-heads the independent research studio Atonaton.

"Subtle things like their posture, their motion or even the sound of their motor can all be harnessed to build a body language that can better communicate with the people around them," she explains in a video.

"When a group of robots are imbued with these behaviours, they begin to feel less like manufacturing equipment and more like a pack of mechanical creatures, each with their own personality and quirks."

One of the reasons Gannon's robots appear to move so naturally is that their actions are not directly programmed; instead, they follow the motion of a simulation that is triggered by the positioning of the people in front of them.

Twelve depth sensors at the base of the installation track a 1.5-metre area around the work, in particular focusing on people's hands and feet.

Slight differences in the robots' programming gives each one a different "personality", so they respond to people in varying ways.

"How do you avoid a robot apocalypse?"

"These subtle behavioural differences help push these machines away from their normal mode of operation – at 100 per cent choreographed coordination — to misbehave a bit and move more like a pack – a group of individuals all responding to the same external stimuli."

The kinds of movements the robots produce give viewers an insight into what they'll do next. For instance, when a robot notices a new point of interest, it will look towards it before moving.

Other movements inspire affection – an example is that the robots will never hold a pose too long before shifting their weight. The implication is that they're tired or uncomfortable, although in reality they could hold a still, outstretched position all day.

One of the observations Gannon makes about her animalistic industrial robots is that people seem to warm to them quickly, without the "Uncanny Valley" effect that makes humanoid robots seem creepy.

She sees this as a useful lesson for designers and engineers in the robotics field.

"As designers and architects, we are trained with a hypersensitivity to how people move through space," Gannon told Dezeen. "So we intrinsically understand and believe in the power of environments, and the people in those environments, to shape our behaviours. But this is not the approach that most roboticists and engineers take, which, due to their own disciplinary training, tends to be more robo-centric."

"I see a great potential, and a need, for architects and designers to contribute their specialised spatial knowledge to the field of robotics, especially as these intelligent, autonomous machines are becoming more normal inhabitants of our built environments." 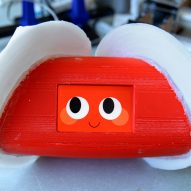 Manus was commissioned by the World Economic Forum and displayed at its 2018 Annual Meeting of New Champions in Tianjin, China in September.

The psychology of robot-human bonding is an area of active research, with Cornell University engineers making a robot that gets goosebumps to communicate its "feelings" and BMW working on ways to increase people's trust of self-driving vehicles.

Gannon wrote on the topic of human-robot coexistence in a column for Dezeen.