Self-driving cars will need to "build up a relationship" with their occupants to reassure them that they are safe, according to BMW board director Peter Schwarzenbauer.

Speaking to Dezeen, Schwarzenbauer said that psychological barriers were now bigger obstacles to driverless technology than legal ones.

"I don't think regulation, insurance and those kinds of barriers will hold back this kind of technology," he said. "I think we are going to find solutions to overcome them."

"But how do we give humans this safe feeling when they are being driven around by a robot? I think the psychological barriers are probably more important than the legal barriers."

Schwarzenbauer said he expected human-driven cars to be banned in urban areas by around 2030 to reduce accidents and improve road-use efficiency, adding that BMW is already exploring ways to overcome human resistance to the notion of being inside a robot.

"We are working now with psychologists in this area to find out what is the right approach to make people feel really safe," he said.

Schwarzenbauer added that traditional car companies are battling with tech giants such as Apple and Google to lead the driverless vehicle revolution and dominate the way people interact with technology in all aspects of their lives.

However he suggested that these companies were more interested in putting their technology in other brands' vehicles than developing their own cars.

"I'm not sure [Apple and Google] are going to build cars [themselves] but it seems that they are moving towards a kind of mobility concept," he said. "They are trying to offer a mobility ecosystem that is part of their 'connected life' approach."

BMW is determined to build its own solutions, he said, adding: "We don't want to be dependent on one or the other tech company."

Last summer the brand announced it had joined forces with Intel and vision-based tech company Mobileye to produce a driverless production car called iNEXT by 2021.

Earlier last year the company celebrated its centenary with its BMW Vision Next 100 concept, which included a digital "Companion" to assist the driver.

This idea was pre-empted in 2014 by designer Matthew Plummer-Fernandez, who proposed personal dashboard-mounted digital avatars to aid communication between car and occupant. 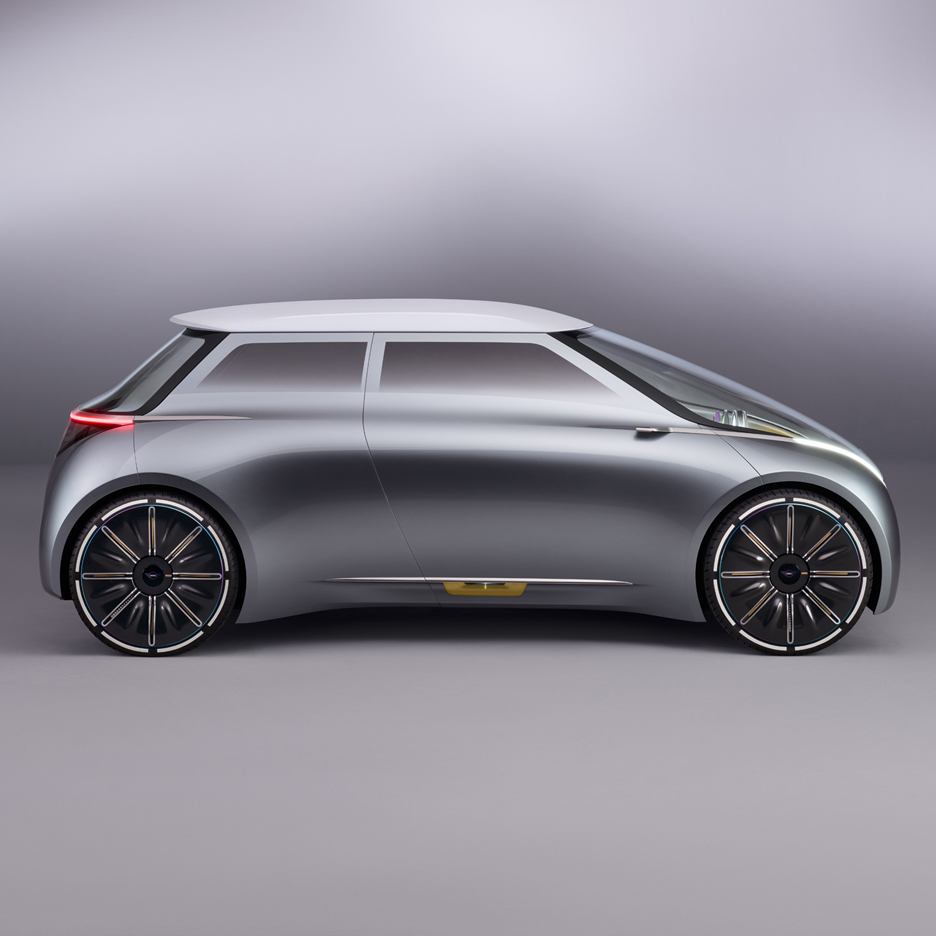 Schwarzenbauer, 57, is the BMW board member responsible for the German car company's MINI and Rolls Royce brands. He spoke to Dezeen following last month's Utopia vs Dystopia festival at A/D/O, a creative space launched by MINI in Brooklyn, New York.

At a dinner at the festival, MIT robotics expert Kate Darling brought a Pleo robotic toy dinosaur to the table, which attendees instinctively petted and cuddled. For Schwarzenbauer, the incident highlighted how humans are able to form emotional bonds with mechanical objects.

"Our brain tells us this is a machine but at the same time you immediately build up a human relationship with this animal," Schwarzenbauer said. "The question is, is there a way of doing something similar with your future robot car?"

Here is an edited transcript of the interview with Schwarzenbauer:

Marcus Fairs: At the A/D/O dinner you said you thought humans would be banned from driving in cities in the future.

Peter Schwarzenbauer: I can imagine that this is the direction cities are going in. If autonomous technology makes traffic safer than when humans are driving, then you will see as a logical step that in major cities, at least in downtown areas, you will probably only be allowed with autonomous cars.

One reason is safety and the other reason I think is that traffic can be organised much more efficiently with autonomous cars.

Marcus Fairs: How quickly will that happen?

Peter Schwarzenbauer: After the launch of this technology, which we think in our case is around 2021, it will probably take 10-15 years. We’re talking about 2030 and beyond probably.

Marcus Fairs: So in BMW's case, autonomous technology will be fully ready to go in four years?

Peter Schwarzenbauer: We are ready to launch this technology in 2021. We are going to showcase how, in our eyes, the perfect autonomous car can look and function. It will be fully autonomous and of course it will be emissions free and fully connected.

Marcus Fairs: That will be a production car?

Peter Schwarzenbauer: It will be a production car yes.

Marcus Fairs: People have assumed that the main barriers to autonomous cars are technological and legal. But what about the human barriers? Will people feel safe? Will they trust their cars?

Peter Schwarzenbauer: I don't think regulation, insurance and those kind of barriers will hold back this kind of technology. I think we are going to find solutions to overcome them. But how do we give humans this safe feeling when they are being driven around by a robot? I think the psychological barriers are probably more important than the legal barriers.

How do we give humans this safe feeling when they are being driven around by a robot?

Marcus Fairs: How do you address that?

Peter Schwarzenbauer: Well I'm not a psychologist but we are working now with psychologists in this area to find out what is the right approach to make people feel really safe. I guess partly it's also a generational issue. I have a 19-year-old son. I don't think that he will have an issue with jumping into a robot and being driven around. But elderly people who are used to being in control...

At the end of the day it comes back to going from being in control, to all of a sudden delegating this control to a machine. This makes it complicated psychology-wise.

It's a little like flying. Most modern jets don't need a pilot, but would people fly in an aeroplane without a pilot? Probably not. People would probably refrain from doing it. So on the car side it's hard to judge how long this will take to be accepted by society.

Marcus Fairs: How do you start to break down those barriers?

Peter Schwarzenbauer: That's a really interesting topic to be honest. I am fascinated by this myself. You saw it at dinner when we had this robot dinosaur on the table. Our brain tells us this is a machine but at the same time you immediately build up a human relationship with this animal. The question is, is there a way of doing something similar with your future robot car? It's really a companion that helps me to make my life easier. Is there a way of doing it?

I don't have an answer for you but I think it's very fascinating to really look more into this area and learn also. I think what we have to learn more about this area, how can it be that we really build up a relationship.

Marcus Fairs: But there will be other artificial relationships in your life, such as with your phone, and with domestic products like Amazon's Alexa. So people might have a cluster of robot friends. How will they relate to each other? Will they merge or will there be a proprietary battle between the different technology providers?

Most modern jets don't need a pilot, but would people fly in an aeroplane without a pilot?

Peter Schwarzenbauer: I think this is one of the key questions that I am not sure I can give you an answer to. One scenario could be what I call a "connected life", where one companion, or avatar, or whatever you want to call it, takes care of everything in your life. Definitely some of the tech companies are following this route.

The other could be that you have specialised areas. This is what our target is. We think that nobody will be better at catering to your mobility needs than us. It's not our vision to become one place to go which will resolve all your challenges in your life – this "connected life". But we want to be the one where you go to for your mobility needs because this is where we think we can bring the biggest benefit to the table and make you happy about your personal mobility challenges.

Marcus Fairs: What about firms like Apple and Google? Are they potential competitors?

Peter Schwarzenbauer: I don't know what Apple or Google's plans are beyond what I hear and read in the press but I definitely would say that as a car manufacturer, we are taking them quite seriously. I'm not sure they are going to build cars but it seems that they are moving towards a kind of mobility concept. They are trying to offer a mobility ecosystem that is part of their "connected life" approach. The writing is on the wall. I think it is important for us to take this very seriously, and we do.

Marcus Fairs: You're taking it seriously in the sense that you want to develop your own technology? Or you're looking to partner with a tech giant?

Peter Schwarzenbauer: Yes we are taking it seriously because at the end of the day, what everyone wants is access to the customers. It's all about consumer access and this is what I think the tech companies' approach is. They can scale very quickly, they have huge capabilities to approach customers directly and this is something where we think we need to have our own ecosystem. We don't want to be dependent on one or the other tech company. I personally would not like to work for a car manufacturer that becomes a supplier for a tech company. I think we can do this on our own and create this mobility ecosystem.

Marcus Fairs: Besides setting up A/D/O, MINI has also started exploring urban living with its MINI Living concept. Why is MINI investing in these kinds of initiatives?

Peter Schwarzenbauer: The MINI brand was bought by BMW in 2001 to do exactly what MINI is doing now, to reach out to a more urban-minded, young, open crowd, which of course a mainstream brand is not sufficient for this kind of target group.

I think you saw it with the people who came to the A/D/O event – these are people who have different views maybe, very progressive thinkers, very open-minded people. I think this fits extremely well with the MINI brand. This adds potential, if you look at us as a total group, it's perfect with MINI because we can get to people that BMW cannot. It is a perfect set up, if we would have target groups that overlap too much, it wouldn't make sense from a group perspective.

Marcus Fairs: So how does A/D/O fit into MINI's strategy?

Peter Schwarzenbauer: I think that A/D/O is a way of reaching out to the target group in a completely different approach. I personally think that especially this target group for MINI, let's say the classic marketing tools – advertising, TV spots – is probably not the right way of positioning a brand like MINI. This is why I would say if you want to be an urban brand, our internal way of seeing is, MINI should be a brand, we strive to find solutions for a brighter urban life, this is our approach.