Chinese artist and activist Ai Weiwei has designed a light blue flag with a white footprint, to raise awareness about the importance of human rights.

Designed to celebrate the 70th anniversary of the Universal Declaration of Human Rights, the pale blue flag has a footprint made up of white dots at its centre.

The design was inspired by Ai's time spent visiting Rohingya refugees in Bangladesh, who were forced to flee attacks in the Southeast Asian region of Burma. He noticed that nearly everyone was barefooted.

He sees the bare footprint as a symbol that relates to anyone who has ever been forced to flee. He took 100 muddy footprints of people young and old in various locations, and combined them in his design.

Footprint is a symbol for displaced people

"It's about human identity," says Ai in a video released to accompany the launch. "Human rights is not a given property, but rather something we can only gain from our own defence and fight."

"Not many ideas can relate to this very broad, but also very special, topic," he explains. "As humans, as long as we can stand up or can make a move, we have our footprint."

The Universal Declaration of Human Rights is a milestone document in the history of human rights, drafted by legal representatives from around the world after the second world war, which sets out fundamental freedoms that every individual is entitled to.

Ai hopes his design will act as a visual reminder for people to educate themselves on the meaning of human rights – something he feels has been forgotten. 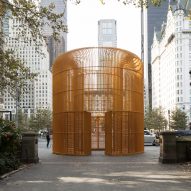 "As we all come to learn, human rights are the precious result from generation after generation's understanding of the human struggle," he said. "I am proud to be a part of this force."

Ai's flag is intended to "offer hope" and to encourage young people to discuss the importance of universal human rights.

It was commissioned as part of a campaign called Fly The Flag. This grassroots campaign was established by a host of arts organisations and charities, including Fuel, Amnesty International, Donmar Warehouse, Human Rights Watch, Liberty, National Theatre, Sadler's Wells and Tate Galleries.

"As the world changes at break-neck pace, the need for our hard-won, anchored system of legal protections for human rights is more vital than ever, yet that system is under severe threat at home and abroad," said Amnesty International, Human Rights Watch and Liberty in a joint statement.

"We are living through turbulent times. Political instability, economic inequality, social change and technological revolution create new challenges and uncertainties," they said. "The Universal Declaration of Human Rights offers people a beacon of hope in these uncertain times."

According to Ai, this flag is just the beginning. He has encouraged others to create their own interpretation of the flag, in order to represent the shared ideal of human rights.

The flag will be made available to schools, communities, offices, hospitals and libraries across the UK to fly over the next six months in events taking place across the UK, in a bid to raise awareness and understanding of human rights.

The flag will be flown for seven days in June 2019, to mark the 70 year anniversary. "Flown both physically and digitally, the flag will remind people of the international commitment made to ensure a minimum standard of safety and dignity to every human being," said the organisers.

Education packs have also been produced for schools to encourage teachers and young people to engage with human rights issues. These packs are available to download for free from the Fly the Flag website.