Chinese artist Ai Weiwei has formed a wall from 2,000 life jackets that were used by Syrian refugees while attempting to cross the Mediterranean Sea as part of an installation in Quebec City.

The Life Jackets installation consists of swim vests found on the shores of the Greek island of Lesbos. These were fastened to a 17th-century stone fortification in central Quebec City for Passages Insolites, a yearly public art festival held in the Canadian city.

Ai Weiwei designed the wall of life jackets to represent the physical and administrative borders that stand in the way of refugees as they attempt to flee the ongoing civil war in Syria in the hopes of finding safety in Europe.

"Agglomerated by the thousands to create a symbolic border, these remnants of the migration crisis refer to the dangers of those desperately trying to escape the violence of war," said Passages Insolites.

The Royal Battery in Quebec City was chosen as the location for the installation to highlight North America's own history of migration and colonialism, as the waterfront fortification was built by the French in 1691 to fend off British attacks.

"By evoking the border demarcations that still govern human mobility, the architectural structure reinforces the purpose of the work that covers it," said the team.

Ai Weiwei's 15-strong team worked for ten consecutive days to erect the installation, using scaffolding to get above the small moat that surrounds the battery.

The team fastened the life jackets to a steel mesh that was then suspended from the rampart. 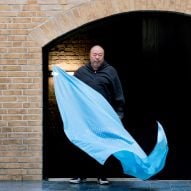 The result is a wall of multi-coloured life jackets that starkly contrasts the traditional European-style buildings surrounding the Royal Battery.

At the bottom of the wall, some of the vests float on the water to give the piece a sense of movement.

Ai Weiwei has erected different versions of the Life Jackets installation in a number of European cities including Vienna, Berlin and Copenhagen; but the Quebec version marks its premiere in North America.

The original installation in Vienna featured only half as many life jackets as the one in Quebec City. This highlights the escalating severity of the crisis, as migrant deaths on sea crossings to Europe have nearly doubled year on year.

Ai Weiwei has long used his art to protest what he views as political injustices, especially the global refugee crisis. In 2017, he erected three giant sculptures made from metal fencing in New York to protest Donald Trump's proposed border-control measures.

And in July 2022, he installed a cage-shaped sculpture in Stockholm that is broken by the silhouettes of two human figures to lobby for a "world without borders".

This year marks the ninth iteration of the Passages Insolites art festival, with 15 other installations spread throughout the city including works by Swedish artist Susanna Hesselberg and Montreal sculptor Olivier Roberge.

Life Jackets will be on show until 10 October 2022. See Dezeen Events Guide for an up-to-date list of architecture and design events taking place around the world.

The photography is by Stéphane Bourgeois.