The Dezeen Awards jury voted unanimously to name Casson Mann's designs for the Lascaux International Centre for Cave Art as Interior Project of the Year 2018. Jury chair Brittney Hart explains why in this Dezeen movie.

New York-based designer and jury chair Brittney Hart says the jury was unanimous in its decision to give the award for Interior Project of the Year 2018 to Casson Mann for the project, which also won the civic and cultural interior category of Dezeen Awards.

"Everyone in the room really loved the project," she says in the movie. "There is an integration of education and experience and we were all just entranced. It's beautiful, beautiful work."

The museum sits at the foot of the hill where the famous caves are located, at Lascaux in France's Dordogne region.  The caves were discovered in 1940 but closed to the public in 1963 due to the damage the paintings incurred from carbon dioxide exposure.

The replicas hang from the ceiling of the museum, encouraging visitors to walk underneath them. The interior mimics the acoustic qualities and temperature of the original caves to make the experience as authentic as possible.

Hart said that the experience of the cave from underneath was just as impressive as the way the replicas were constructed. 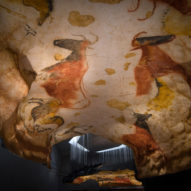 "It's these really beautiful, suspended, almost coarsely assembled objects," she explains. "From the underside you experience the cave and from the outside experience the construction of the installations."

Hart says the jury was also impressed by the lighting in the museum.

"The way that it's lit is really fantastic," she says. "There's uplighting to illuminate the cave art and it's also illuminated from punctures in the ceiling, so you see this gorgeous, heavenly illumination from above."

Casson Mann is known for its work in exhibition and museum design. Last year the practice revamped the foyer of London's Natural History Museum as part of wider renovations of the historic museum.

It was one of 33 winners announced at the Dezeen Awards ceremony in London on 27 November 2018, hosted by British comedian Sir Lenny Henry. Each winner was given a unique, hand-made trophy designed by Atelier NL.