British cutlery company Viners has released a collection of kitchen knives with rounded tips in a bid to reduce knife-related incidents.

Designed with safety and functionality in mind, the six-piece Assure knife collection boasts a blade design with a blunt, rounded tip that won't pierce human skin.

The design is Viners' response to recent legislation by the UK government that reclassifies kitchen knives as offensive weapons, leading some retailers to remove knives from shelves in store.

The law was made after reports showed that knife-related crime incidents are at a record high, with a reported 285 fatalities in the past 12 months in the UK.

The Assure knives can't be used as a weapon to stab someone with, but also prevent the user harming themselves by mistake when using the knives in a kitchen environment.

"We have a responsibility to ensure that we are doing everything we can to make the kitchen a safer place and we are confident our new knife design will help us achieve that," she added.

Taking design cues from Japanese santoku knives, Viners' Assure knives feature a squared shape with a flat surface in place of a pointed tip, in a bid to reduce and prevent injuries and potential fatalities.

According to the company, each of the knives in the Assure collection have been "repeatedly tested to ensure the tip does not pierce skin intentionally or otherwise".

Each knife is made from stainless steel with black soft-touch handles and a non-stick coating on the blade to reduce cutting friction.

"Viners has potential to make a significant contribution to knife safety within the home and wider community," said John Ashton, advisor to the Merseyside Police and crime commissioner on violence prevention.

"Knife crime has seen an alarming increase, not just locally but across the whole of the UK, so it is extremely encouraging to see this British company taking the initiative to address this public health concern," he continued.

The knives will be supplied to retailers in tamper-proof packaging to reduce theft in stores.

The 'Think 25' logo has also been added to packaging to remind retailers to check proof of age for anyone they suspect to be under the age of 18 at the point of purchase.

Danish brand Veark recently developed a chef's knife from a single piece of steel, which forms a knife with a blade that is a continuation of the open handle, making it easier to grip and wipe clean. 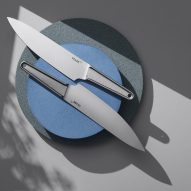 Veark's CK01 knife is made from a single piece of steel

The Veark CK01 chef's knife was shortlisted for the Homeware category of the Dezeen Awards 2019.

The winner of this category was a collection of three rugs by Raw Edges for GAN that each display the reverse of their traditional embroidery to showcase what is often hidden.