Hotelier Valeri Chekheria explains how his team transformed the headquarters of a Soviet printing press in Tbilisi into the Stamba Hotel in this movie Dezeen produced for the AHEAD hospitality awards.

Stamba opened in May in Tbilisi's emerging Vera neighbourhood. The hotel was designed by an in-house team at Adjara Group, the developer behind the project, and was awarded New Concept of the Year at the AHEAD Europe 2018 awards.

The hotel is notable for its cavernous lobby spaces, which retain many of the building's original features, including printing equipment suspended from the ceiling.

"Stamba is located in an amazing Soviet architectural building" says Chekheria, CEO at Adjara Group, in the video interview Dezeen filmed for AHEAD in London.

"It used to be a publishing house," he continues. "The first communist newspaper in Georgia was published there."

The lobby space retains much of its original character, Adjara Group did make one striking addition - a glass-bottomed swimming pool installed on the roof, which lets dappled natural light into the building.

"The light comes down and it moves amazingly across this concrete place with lots of plants and trees," says Chekheria.

The hotel's spacious guest rooms are notable for their high ceilings and curated artworks from Georgian artists.

"The guest room experience is amazing," says Chekheria. "You enter and you see this high-ceilinged 56-square-metre room." 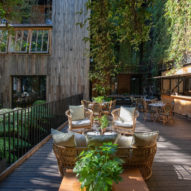 According to Chekheria, Stamba has been designed in order to promote interaction between international guests and locals in its public spaces, including two courtyards geared towards social activities and events.

"Locals come with their kids and hang out all day on the grass," Chekheria says. "We give our customers the local experience through our hotel, access to local people. That was the idea when we started the Stamba Hotel – to have a very local brand and to be very locally designed."

This movie was produced by Dezeen for AHEAD. It was filmed at the Park Plaza Westminster Bridge hotel in London. Images are courtesy of Adjara Group.