The gallery will function as a new entrance for the cluster of cultural buildings located on an island in the Spree river, an area that David Chipperfield Architects has been re-masterplanning since 1999.

Occupying a narrow plot of land, the new entrance building features a grand terrace that runs the full length of the building.

The facade comprises reconstituted stone with natural stone aggregate, chosen to complement the limestone, sandstone and rendered frontages of the other museums on the island.

The building is raised up on a stone plinth, over which sit the tall narrow columns that form the colonnade. Chipperfield's team chose this classical style to work in conversation with the Neues Museum next door.

Neus was designed by Prussian architect Friedrich August Stüler in the mid 19th century, to a commission from the King of Prussia Friedrich Wilhelm IV, who envisaged Museum Island as a "cultural acropolis". The building opened in 1855, but closed in 1939 after sustaining heavy bomb damage during the second world war. 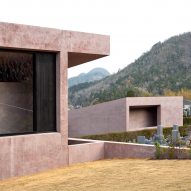 The museum finally reopened in 2009, following a renovation from David Chipperfield Architects and Julian Harrap Architects. The project was awarded the prestigious Mies van der Rohe Award in 2011.

Three flights of wide stone steps lead from the bottom of the James Simon Galerie's plinth to the lower colonnade.

At the upper level visitors, can enter through the foyer, which provides access to the Pergamon Museum's main exhibition space and the grand terrace.

The cafe is also located here, with the museum shop and cloakroom on a mezzanine level. Temporary exhibition spaces and an auditorium are at basement level, which links via the Archaeological Promenade to the Neues Museum, the Altes Museum and the Bode Museum.

Inside, the walls of the James Simon Galerie are realised in smooth, pale concrete.

Theses spaces are now being fitted out in time for the official public opening in summer 2019.

The gallery is named after patron of the arts James Simon, who donated his collection to the city at the start of the 20th century.

Chipperfield has a reputation for sensitive additions to historic sites. He recently completed a grand new entrance for Selfridges department store in London, and a major expansion to the city's Royal Academy of Arts.

Photography is by Simon Menges unless otherwise stated.