In this movie, architect Sarah Izod explains how she drew from the children's book Where the Wild Things Are to create an other-worldly ceremony for the inaugural Dezeen Awards.

Thirty-three Dezeen Awards winners were revealed at the ceremony, which was hosted by British comedian Sir Lenny Henry and attended by 400 people.

The event took place on 27 November in a landmark former industrial building in London, which Izod filled with textiles, stilt walkers and painted trees.

Izod said her favourite childhood book Where the Wild Things Are by Maurice Sendak served as inspiration for the atmosphere of the evening.

"The ambition was to have the guests arrive and feel like they were entering some sort of strange nocturnal forest," she explained in the movie, which Dezeen filmed at the ceremony.

"The raw architecture of the former industrial space was the starting point – it had a sense of other-worldliness."

Izod used a variety of elements to realise her concept, including a huge installation featuring a white tree surrounded by suspended ribbons.

The tree was constructed from painted cork bark wrapped around a central column in the venue. A pair of stilt walkers performed around it, adding to the eerie atmosphere of the night.

"We had stilt walkers who we dressed in these long white robes," Izod explained. "The movement created something of this other-worldly presence. They felt like strange unknown creatures."

As guests arrived at the ceremony, they were met with a suspended light box with a canopy of trees printed onto it. This was followed by a suspended white ball, illuminated to resemble a moon.

Izod worked with Dezeen Awards headline sponsor Delta Light to create a series of light installations resembling forest debris throughout other spaces at the venue.

"The guests came across an electric forest of installations that were produced by Delta Light," said Izod. "They have the language of being broken trees and branches falling down." 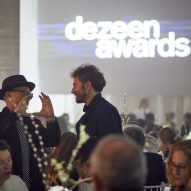 Winners of the first ever Dezeen Awards celebrate at lavish ceremony

Textile was another key element to the design of the event.

"The main space was wrapped in over 600 metres of Kvadrat fabric," Izod said. "After dinner the guests could sit in pieces of Moroso furniture which has been wrapped in fabric."

DJ and composer Peter Adjaye created original music for the ceremony, while Izod enlisted London steel band the Ebony Steelband Trust to perform throughout the event.

"We felt that the timbre of the steel band was well suited to the concrete of the space," she said.

Swiss graphic designer Micha Weidmann worked with photographer Leon Chew to create the visual identity for the ceremony. Together they produced a series of videos referencing the former industrial space, using the colour palette of oil and thin-film interference.

"I think that people were surprised by what they were met with and so there was that moment of real delight and it set the atmosphere for a celebratory evening very well," Izod reflected.

"Designing for such as discerning audience, which included some the worlds most influential designers and architects, was really quite a task and so it was important to get it right."

Dezeen Awards winners were given a unique, hand-made trophy designed by Atelier NL. See the full list of winners at www.dezeen.com/awards/winners.