French duo Odile Hainaut and Claire Pijoulat, the co-founders and directors of New York's WantedDesign fair, have received France's Chevalier of the Order of Arts and Letters for promoting the country's design talent in the US.

Hainaut and Pijoulat will receive the award, which is credited as one of France's highest honours, in recognition of their endeavours to bolster cultural relationships between the US and France.

"We are very honoured and proud to be part of the 2018 promotion receiving the prestigious title of 'Chevalier de l'Ordre des Arts et des Lettres'," said the duo in a joint statement.

"We feel highly grateful, and hope we will be able to trigger more French-American cultural exchanges and friendship in 2019 and beyond."

The pair established New York's annual WantedDesign as a platform for showcasing design in 2011. The annual event has featured several French talents, such as Francois Brument, Philippe Nigro, Matali Crasset and Francois Azambourg

WantedDesign is also the main partner of the Oui Design Initiative, which was set up in 2016 to formally boost the cultural relationship between France and the US.

As part of Oui Design, Hainaut and Pijoulat produced the Transatlantic Creative Exchange, which teamed French and American designers to work on projects together, to be presented at WantedDesign.

Prior to meeting in New York in 2010, Hainaut and Pijoulat had both gained a varied experience in the industry. Hainaut, who was born in Paris, worked at the French international Design and Branding agency Raison Pure, moving to New York with the company in 1999. 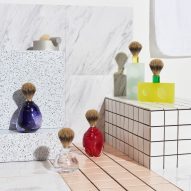 Eight years later, she set up the city's Gallery R'Pure, which is dedicated to collectible design.

Pijoulat was born in Annecy and moved to the New York to work in the US for French design house Roche Bobois. She left the company to focus on her own projects in 2010 – the same year she met Hainaut.

The duo organise WantedDesign to coincide with the International Contemporary Furniture Fair (ICFF), which takes place every May. It is celebrated as the "largest international off-site design exhibition in the history of New York City".

WantedDesign's inception marked the beginning of a New York design week. Planning for the citywide NYCxDesign festival began just one year later – Hainaut and Pijoulat were included in the committee – and the inaugural event took place in 2013.

WantedDesign is a major part of the annual festival, and involves simultaneous showcases at Manhattan's Terminal Stores and Brooklyn's Industry City, as well as retail space. Highlights of last year's installations included a Brooklyn building painted with Memphis-style graphics and a pop-up restaurant built from recycled food packaging.

France's Order of Arts and Letters was established in 1957 to recognise those contributing to the country's arts and culture activities.

Granted by the French Minister of Culture, it contains three grades that recipients can progress up. Hainaut and Pijoulat will receive the first tier, which is Chevalier, or Knight, while the upper two include Commander and then Officer.