The latest photos released by the Beijing-based firm, led by architect Ma Yansong, show the progress made on the 560,000-square-metre mixed-use complex in Nanjing.

The mountain-like towers ring the perimeter of the complex, and curving elevated pathways, bridges and corridors will lead residents through the commercial areas to public gardens and spaces. 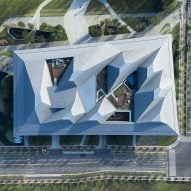 White glass louvres create the evocative forms of the towers, which are designed to look as if they have been shaped by wind and water over millennia. Mountains were also the inspiration for Nanjing's NBBJ-designed exhibition centre.

Nature has a deliberate presence in the complex, with ponds, rivers, waterfalls and pools integrated into the masterplan. Trees and entire structures covered in greenery break up the futuristic forms of the cityscape.

Nanjing Zendai Himalayas Centre "seeks to restore the spiritual harmony between humanity and nature through the integration of contemplative spaces that, while immersing inhabitants in nature, still meets the conveniences of modern day living," explained the architect.

The development has entered its third and final stage of construction, and is due to complete in 2020.

MAD recently completed a similarly mountainous tower complex in Beijing. The ten rounded towers of Chaoyang Park Plaza have dark glazing that makes them appear like rock formations in the humidity haze.

Huangshan Mountain Village on the shore of Taiping Lake mimics the contours of the granite mountain range that rises behind it, making them appear as part of the landscape when seen through drone-shot footage.