Argentinian studio IR Arquitectura has transformed a leftover corner of a 1950s building in Buenos Aires into this small apartment, using built-in furniture and a caged balcony.

Called El Camarin, the renovated residence is located in Charcarita – a neighbourhood in the north-central portion of Argentina's capital.

It occupies a triangular portion that was left empty after the mid-century building was broken up into different spaces.

The main building's street corner is chamfered, giving the apartment an unusual shape. IR Arquitectura describes it as an "ochava", which translates to chamfer.

"This small apartment, residual product of the fragmentation of a property built in the 1950s in the neighbourhood of Chacarita, forms an 'ochava' on the first floor with visuals open to the outside as exposed to the curious look from the street," said IR Arquitectura in a project description.

To make the most of this unusual setting, the firm extended the front of the building with a curved terrace, adding an extra seven square metres to the existing 18-square-metre space.

Curved white mesh sections on the front offer street views and allow in plenty of natural light, while maintaining the privacy of the residents.

A series of similar caged balconies also flank a concrete tower that architecture firm Adamo-Faiden has recently completed in the city.

At El Camarin, plant pots and wooden stools decorate the balcony, with white beams and glass over the top. Folding glass doors with wooden frames open into the apartment behind, to let light in colder months and be opened up during hotter weather. 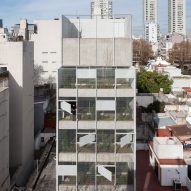 "The incorporation of spaced enclosures offers a new device, a diaphragm able to expand the use of the apartment in summer and to contract it in winter," said the firm.

To make the most of the small and irregular space inside, IR Arquitectura designed built-in furniture for the other two walls, which serves the living room in between.

Cabinetry on one side features a small kitchen and encloses the bathroom behind. White doors with circular blue handles open to reveal the fridge and the washing machine, while another folds down to form a table that can be used for eating or as a study desk.

Shelving is arranged along the other wall to form a mini library for the residents' books. A stepped platform is built up behind this, forming a bench and desk at the lower level, and the bed at the top.

Cushions and bedding in muted hues, greenery, and other possessions pick on the tones of the tiled entrance, adding splashes of colour to the otherwise neutral interior of white furniture and grey flooring.

As cities becoming increasingly dense, El Camarin joins a number of tiny residences that pack a punch in a small amount of space. Others include a 24-square-metre São Paulo flat with multi-functional furniture and a New York apartment that functions like one twice its size.

Photography is by Fernando Schapochnik. 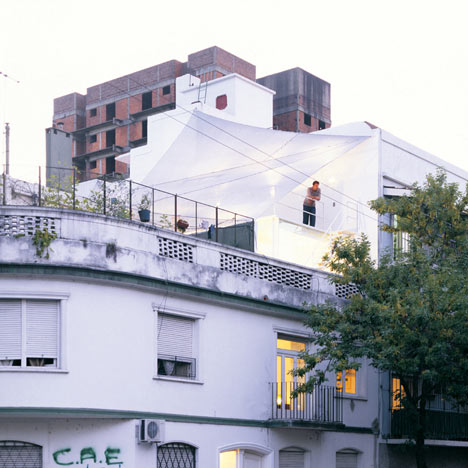