Featuring wooden siding and a butterfly roof, the two-storey Lauck House is situated on a secluded lot in Princeton that spans four acres (1.6 hectares). The home, built in 1950, was designed by Breuer – who trained at the Bauhaus and migrated to America in the 1930s.

The restoration was overseen by the home's owners, Rafi and Sara Segal, both of whom studied architecture. Rafi leads Rafi Segal Architecture Urbanism, which has offices in Princeton and Tel Aviv, while Sara worked on the project as an independent architect.

Encompassing 3,800 square feet (353 square metres), the home was designed by Breuer to be fluid and adaptable. One side of the dwelling contains the master bedroom, while the other encompasses the kids' rooms. The kitchen and living room are situated in the centre of the plan. Ample windows, particularly on the south, provide a strong connection to the surrounding landscape.

"The south-facing glass facade extends the interior outwards to the garden and captures direct sunlight and heat during the winter days, while the roof overhangs to create shade during the summer," said the Segals.

The home was modelled after a demonstration house Breuer designed for a 1949 exhibition at New York's Museum of Modern Art (MoMA). As part of the House in the Garden exhibition, Breuer created a family home that was put on view in the museum's sculpture garden. The show was part of MoMA's effort to promote modern architecture in the US, while also addressing the rise of suburban living.

"Breuer's design introduced new ideas which have since become common practice in contemporary design of the single-family house," said the Segals.

The Lauck House was commissioned by Gerold Lauck, a New York advertising executive who created the famous slogan "A Diamond is Forever". Breuer was asked to re-create the MoMA house for Lauck, his wife and their son. 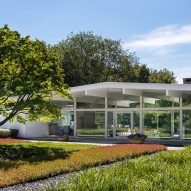 "The Lauck House presents a modern masterpiece that is simple in form and layout, yet rich in its materiality and spaces of intimacy and openness," said the Segals. "The surrounding landscape is incorporated into the design in a way that being inside the house makes one feels an immediate sense of connection to the outdoors."

Over the decades, the Lauck House has had four owners, including the Segals. In the mid 1980s, the second owner added a sunroom and gallery to the southwest corner of the home.

The Segals purchased the dwelling in 2008 and began the renovation project, which was divided into two phases. The second phase, completed this year, entailed re-cladding the facade with cypress siding and refurbishing the steel-framed windows. The Segals also restored cabinetry, renovated two bathrooms, and painted the interior and exterior according to Breuer's original colour scheme.

The first phase was completed in 2009 and was largely focused on the interior. The Segals rebuilt partitions that had been removed, updated the kitchen and bathrooms, and tracked down hardware that was identical to original pieces. They also removed paint from interior walls to reveal the home's natural cedar panels.

To assist with colour selection, the duo turned to the Rockefeller Foundation. After the MoMA show, the Rockefeller family purchased Breuer's showhouse and had it assembled on their property in Pocantico Hills, New York. The foundation was able to provide the home's original colour scheme and advise on how to recreate those colours based on current technology.

"The restoration and renovation work shed new light on this timeless icon, recreating the notion that Modern Architecture can be visually and spatially rich while creating a sense of home and place, and that great design has the power to enhance everyday life," the architects said.

Breuer's architecture in the USA ranges from private houses like the Lauck House, and a residence in New Canaan, Connecticut, that was expanded by Toshiko Mori, to public buildings like his New York home for the Whitney museum – now occupied by The Met.

Photography is by Jeff Tryon.