Elon Musk has driven a Tesla through his Boring Company's test tunnel in Los Angeles County, in the first public demonstration of what he hopes will form a congestion-beating new subterranean transport solution.

The demonstration of The Boring Company's Loop prototype system occurred on Tuesday 18 December 2018 in front of an audience of invited VIPs and journalists in Hawthorne, California.

Its test track involves a 1.14-mile (1.83-kilometre) tunnel, with a platform at either end that lowers the car into the tube and lifts it out again, hurtling it along at speeds of up to 150 miles (241 kilometres) per hour in between.

To equip the car for the ride, it is given a retractable, outward-pointing set of front wheels that enable it to move along the track.

In his presentation at the event, Musk called the system "an actual solution to the soul-crushing burden of traffic".

Musk founded the Boring Company in 2016 after complaining that road congestion in LA was so bad he wanted to "build a tunnel boring machine and just start digging".

He claims to have poured about $40 million of his own funds into the project in the two years since. As well as the Hawthorne tunnel, The Boring Company is pursuing plans to dig underground networks in Chicago, LA and Washington DC.

The test tunnel starts at the car park of one of Musk's other companies, Space X, and emerges elsewhere in Hawthorne. While it was built for research purposes, Musk has said he hopes it will eventually form part of a network spanning greater LA.

The Boring Company used a Tesla Model X SUV for the demonstration, although it is designed to work with any electric, autonomous car.

Tesla in @boringcompany tunnel with retractable wheel gear that turns a car into a rail-guided train & back again pic.twitter.com/3a6i0NoSmi

Rather than using the "car skates" imagined in the company's initial vision, the system relies on additional wheels fitted to the car to allow it to move along the track like a train.

These wheels also serve as a bumper, cushioning the car from too much jostling. They would fold under the car when not in use, and could be fitted at the point of assembly or afterwards for a few hundred dollars, according to the company.

In Tuesday's test, the employee-driven Model X reached speeds of 53 miles (85 kilometres) per hour, although it is intended to reach 150 miles per hour in the future.

"At that speed, it will feel like teleporting within a city," Musk said at the demonstration.

According to journalists who experienced the system firsthand, it's currently a "bumpy" ride, but that is due to unfinished surfacing. 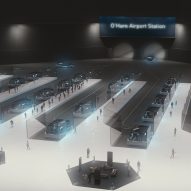 As well as providing an underground superhighway for cars, The Boring Company envisions its tunnels forming a public transport solution, with autonomous vehicles in constant circulation to pick up pedestrians and cyclists.

Musk shared news of the demonstration on Twitter, where he is a prolific poster and polarising figure. It received a mixed response, with some praising the company's ingenuity, and others worrying it was "horrifically unsafe" and criticising it for being "like a subway except with way less capacity".

The Boring Company's next step will be to continue work on its winning bid to build a tunnel system connecting downtown Chicago with O'Hare Airport in 12 minutes, which is currently waiting on regulatory approval.