A glass-enclosed kitchen at the entrance to this Tel Aviv restaurant by Vered Kadouri and Craft & Bloom turns the food preparation into an art performance.

Located on a ramshackle street within the city's Levinsky Market, the designers wanted the 35-seat restaurant to be a "peaceful cocoon amidst the chaos".

"This setting, while charming in its authenticity, posed an immediate and obvious design challenge," said the designers. "How does one create a refined dining experience on a derelict street that is otherwise marked by wholesale storefronts and bodega-style corner stores?"

"In order to create the desired atmosphere, we closed the entire street-facing facade by removing all the existing metal grates and installing a combination of glass and dry wall painted in a natural finish, resembling something closer to an art gallery than a restaurant," said the designers.

"This technique created an intimate, womb-like effect that dulled out street noise and separated guests from the unruly outside world," they added.

Comparing watching Berger at work to "watching an artist with her paintbrush", the designers installed an open kitchen at the restaurant's entrance that could showcase the preparation of food to diners as a nightly performances.

Berger's workstation juts out beyond the glass so that it is level to the guests’ countertop seating. This was done to deliberately put Berger on the same plane as her patrons.

"The glass-enclosed kitchen is positioned rather rebelliously at the entrance to the restaurant, making it clear to arriving guests that the food is at the forefront," said the designers.

"Opa is a place whose cuisine is consumed as much with the eyes as it is with the stomach, and quality ingredients are prepared with respect, care and transparency." 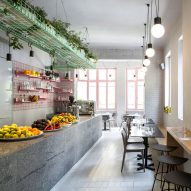 Berger's vegan dishes are known for their artful, minimalist appearance, which the designers wanted to reflect in the interior design.

"The space's design was inspired entirely by Shirel's cuisine and process: minimal, clean, locally-sourced, and with an air of understated elegance," they explained. " Like Shirel, we believe in focusing on impeccable materials and exploring the ways in which they organically work together."

"Over-styling, much like over-spicing, is only necessary when the bare ingredients are in need of clever disguise. In the case of Opa, every element shines in its simplicity."

Inspired by the locally-sourced ingredients, the designers employed natural and local materials such as Hevron stone for the inner patio, which is hand-cut just 25 minutes outside of the city. In addition all of the ceramics, including tableware and vases, were made by local studios.

Decorative lights were designed in-house and made by a local craftsman in Jaffa, while the artisanal soap in the restrooms is made by local grooming company, Maapilim.

An ornamental indoor olive tree was added to create the ambience of a Mediterranean kitchen.

Photography is by Yoav Gurin.