The collection features four sizes of crystal tray called Soft Pond, and Tangent, a series of cube-shaped frames that hold various assortments of metal rings and crystal discs depending on their function.

Intended to resemble small ponds that have been "scooped up and placed on the table", the trays are discs of four blue or green flat-cut crystals of varying sizes, layered on top of one another to create the illusion of depth.

"A mix of crystal thicknesses was used in the objects to gain a range of shades and convey a feeling of depth, which is the same phenomenon that appears in large bodies of water – the deeper the lake, the darker its colour," said Nendo.

To better resemble a body of water, each layer of crystal is tapered so that it is thinner on its outside edge.

The upper surface of the trays was treated with acid to create a subtle incline towards the middle of each product, a technique known as acid pickling. 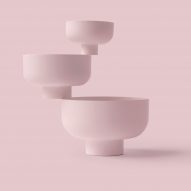 The multi-use frames feature overlapping metal structures that are designed to function in a number of ways, including as a candle holder, vase, tray, and a mirror.

Each frame is complete with a single, flat-cut crystal that can be used as a framing device when a flower or candle is placed on the other side, gently refracting the image.

"The flowers or the flame of the candle can be enjoyed by viewing them through the carefully positioned flat-cut crystal disks, framing the object," said Nendo.

Recent products by Nendo include a fungi-like tableware and tea set and a series of cast glass chairs that feature a U-shaped base formed by the effects of gravity on molten glass.