IM Interior has transformed a garage in Vilnus into a 21-square-metre micro home clad in Corten steel in order to demonstrate "another way of life".

The new studio flat in Lithuania has a single space for the occupant to live, cook, sleep and work in, along with small bathroom.

"I wanted to show how little a person needs," said Indrė Mylytė-Sinkevičienė, founder of IM Interior.

"In 21 square metres it is really possible to work and live. This particular interior is like another way of life".

Located in the medieval old town of the Lithuanian capital, the micro home has been inserted into a former garage. The original structure has been re-clad in weathering steel, known as Corten, and reconfigured with new openings.

The interior has been designed to contrast the harsh metal exterior as much as possible, with a warm birch wood lining.

The living, dining and bedroom space has two narrow picture windows, giving a view of the block opposite and of the greenery outside. The bed, positioned like a large window seat beneath one of these openings, is surrounded by concealed storage. 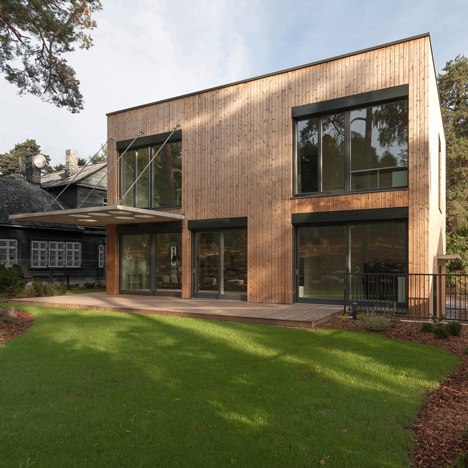 A wire-mesh security glass shower door gives a touch of the exterior's industrial feel to the inside, and leads to a compact bathroom.

"Three shapes were used in the interior: a square, a circle and a triangle," said the architect. Triangular tiles were used to decorate both the floor of the living space and the bathroom.

The garage sits at the end of a run of old brick pantries described as "ramshackle" by the architectural studio. Opposite stands a block of flats, and behind is a small hill covered with trees.

This mixed urban environment, along with the site's former use, inspired the industrial look of the new building, which is set against bursts of greenery.

"The urban environment has dictated the architectural style," said the designer. "The facade has a metallic rust that looks like a garage, but next to it there are some green plants."

Concealed strip lights inside and out both illuminate the interior and allow the weathered steel to "glow" at night.

Micro-homes have been gaining popularity in cities and rural areas alike, with some proposing them as a solution to housing shortages and high property prices.

Mandalaki Design Studio in Milan has designed a 26 square metre, customisable "Monocabin", Grimshaw made a 35-metre-square micro home that can fit IKEA furniture, and BIG built an angular cabin with an internal floor space of just 17 square metres.