The third Chicago Architecture Biennial will forego a single theme in order to push the architecture profession to "think more meaningfully" about a host of contemporary issues, according to artistic director Yesomi Umolu.

Titled "...And Other Such Stories", the biennial will be broadly structured around "four guiding curatorial frames" – established by Umolu and her team after months of research, which involved trips to Johannesburg, São Paulo and Vancouver.

The Chicago-based curator said the plan was to ruminate on a wide scope of issues in today's society, rather than a single focus, to tease out many different responses.

"We don't have a singular manifesto, we're not trying to convince the world of a particular perspective," she told Dezeen during a press event on 5 February 2019, when the focus of the 2019 Chicago Architecture Biennial was revealed ahead of its opening in September this year.

"What we're trying to do is draw out multiple positions and perspectives, a range and diversity of experience, and how through being aware of that, there might be solutions or learning points that you can take forward."

Umolu's four-part framework will include "No Land Beyond", which will look into the relationship between the built environment, nature, ecology, and landscape; "Appearances and Erasures", which addresses memories and histories associated with monuments and memorials; "Rights and Reclamations", exploring architecture's relationship to advocacy and activism; and the final frame, "Common Ground".

Umolu described the latter as "embedded" into the approach to the biennial, to be achieved through collaborations with a range of groups outside of the architecture industry like social practitioners, spacial practitioners, leaders of social movements, activists, and teachers. 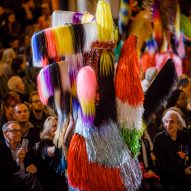 "Common ground is embedded in our approach to the biennial overall, which is that architecture is a common ground across different cultures, societies, peoples and communities," she said. "Everyone has a meaningful contribution to the question of architecture."

Umolu therefore intends to ensure the event is appealing and accessible to a wider audience in order to get as many as possible involved.

Architecture should be tool for solving contemporary issues

"Anything is accessible depending on the way that you present and package it," Umolu said. "If you create that space of openness people will immediately feel included."

The 2019 Chicago Architecture Biennial marks the third edition of the annual event, launched in 2015 to establish the city as an epicentre for architectural discourse. Umolu follows in the footsteps of 2015 directors Joseph Grima and Sarah Herda, and Sharon Johnston and Mark Lee, who led the last event with a focus on history.

Umolu, whose co-curators include curator ​Sepake Angiama​ and Brazil-based architect Paulo Tavares​, said she hopes this year's edition will present the architectural profession as a tool for addressing the issues in contemporary society.

"Architecture can play a role by taking the lead and trying to push the profession to think more meaningfully about some of these questions," Umolu said.