The five Mies van der Rohe Award 2019 finalists have been announced, with a public space created inside an abandoned psychiatric centre and a revamped 1960s housing block making the list.

Awarded biannually, the Mies van der Rohe Award recognises the best piece of European architecture completed in the past two years. The projects in the running for this year's award come from Spain, Germany, France, Belgium and Albania.

The jury said this year's award recognised built works that "allow people to find different ways of using spaces and transform them into different places".

This year is the first time a project in Albania has been named a finalist, with the Brussels-based practice p51N4E's re-design of Skanderbeg Square in Tirana on the list.

The architecture studio has turned the square into a pedestrian space with a mosaic of paving formed of stone slabs from around the country. Twelve gardens filled with trees encircle the public space.

"The square's green belt was treated as the beginning of an urban forest, the starting point of a reflection on the whole city as an urban ecosystem," said p51N4E.

Architecten de Vylder Vinck Taillieu has been named a finalist for PC Caritas, a new public space in an abandoned psychiatric centre.

"The building [was] just kept and prepared to become an experimental space to re-discover and -explore and -define possible other ways of life," the architecture studio explained.

Terrassenhaus Berlin, a mixed commercial and residential scheme where occupants can customise themselves within an open frame, also made the list. The building's ziggurat-style shape creates wide outdoor terraces, with tilted surfaces that channel rainwater into a garden. 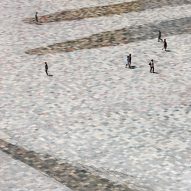 "The building's envelope is built out roughly in concrete and plywood, only including central cores with elevators and bathrooms. All other additions, such as spatial separations, are made by the users themselves according to their needs," said Brandlhuber+ Emde, Burlon.

The Plasencia Auditorium and Congress Centre in Spain, which was designed by Spanish practice SelgasCano, is the fourth finalist. The luminous public building impinges only minimally on it's protected landscape, with a small footprint supporting a programme that expands out at the upper levels.

"We plotted to make this building set the stage for a different method and preserve an island of natural earth in the future expansion zone, even if it meant being a small puddle," SelgasCano said.

Frédéric Druot Architecture, Lacaton & Vassal Architectes and Christophe Hutin Architecture's renovation of a mass housing scheme built in the 1960s – transforming three blocks of 530 homes into a more pleasant place to live – is the final project on the list.

The architecture studios said they added winter gardens and balconies to "give to every dwelling new qualities: more space, more light, more view."

Finalists were selected from a shortlist of 40, and the winner will be announced at the end of April 2019. An awards ceremony will take place on 7 May 2019 at a ceremony held in the Mies van der Rohe pavilion in Barcelona.