The retail giant revealed today that it will no longer create a headquarters in the Queens neighbourhood, despite announcing the area as one of two successful bids for the project in November 2018.

"While polls show that 70 per cent of New Yorkers support our plans and investment, a number of state and local politicians have made it clear that they oppose our presence and will not work with us to build the type of relationships that are required to go forward with the project we and many others envisioned in Long Island City," said Amazon in the statement released on its blog.

Amazon will not reopen HQ2 search

Amazon chose to split HQ2 between the burgeoning riverside neighbourhood and Crystal City in Arlington, Virginia – close to Washington DC – following a highly sought battle between cities across North America.

In the statement, the company adds that it does not plan to reopen the search, and will focus on developing the Virginia hub and a new operations centre in Nashville, Tennessee.

The multibillion-dollar company had promised to provide New York and Virginia with $2.5 billion (£1.92 billion) and more than 25,000 new jobs.

The Amazon LIC deal, however, triggered a major backlash from local officials on account of the major incentives offered by New York governor Andrew Cuomo and mayor Bill de Blasio. These were expected to total $1.525 billion (£1.17 billion), which would be nearly triple the $573 million (£440 million) offered by Arlington County.

State senator Michael Gianaris, who represents Queens neighbourhoods including Long Island City, and city council member Jimmy Van Bramer organised a protest on 14 November 2018, the day after the deal was announced. A joint statement issued by the pair, also outlined their "serious reservations" about the project. 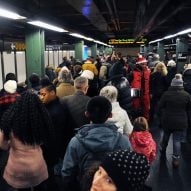 The major retailer was also in line to receive a $325 million (£254 million) cash grant from the Empire State Development Corporation – a New York organisation that promotes business investment and support local economies.

Cuomo and de Blasio championed the idea that HQ2 would boost the surrounding area, with Amazon promising to include spaces for a tech startup, and artist and industrial businesses in its development, as well as a primary or public school.

But many were concerned about the wider impact such a large project would have on the city. In an Opinion column for Dezeen, Alan Brake said it would only exacerbate New York City's already stretched infrastructure, cramped public spaces and sky-high rents.

It was also unclear if jobs would be offered to New York locals – an issued highlighted by Alexandria Ocasia-Cortez, US representative for the city's 14th congressional district, in a series of tweets.

Amazon's hunt for the HQ2 site to accompany its first in Seattle began in September 2017, with the aim to find a metropolitan area with over one million occupants, within 45 minutes of a major airport and near to a highway.

A shortlist of 20 cities vying for the project was announced at the beginning of last year. At the time, Aaron Betsky flagged that that HQ2 might not offer as many benefits as competitors originally thought in an Opinion column for Dezeen.