Daredevils can enjoy sweeping views of Los Angeles while descending a transparent slide almost 1,000 feet above the city (+ movie).

The Skyslide opened last weekend at the 72-storey US Bank Tower, which is the tallest skyscraper both in LA and in California at 1,018 feet (304 metres) high.

The 46-foot-long (14-metre) slide connects the 70th and 69th floors of the building, located in Downtown LA.

Made from 32-millimetre-thick glass panels, the structure is supported by a metal frame that hangs off the side of the tower.

The see-through enclosure emerges from a window, then curves before sloping down the side of the tower and finishing on an open-air roof deck.

Visitors sit on a mat while they hurtle through the square tube for just a few seconds.

The experience is fairly short compared to riding the giant slide that spirals through the Anish Kapoor-designed ArcelorMittal Orbit in London, which opened last week. 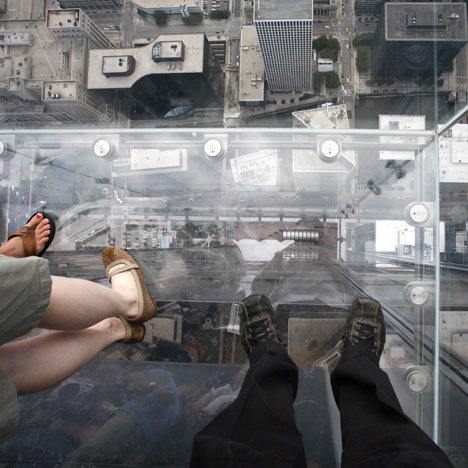 The US Bank Tower was designed by New York-based Pei Cobb Freed & Partners and completed in 1989, becoming the first supertall tower in the western United States.

The new tourist destination at its top provides 360-degree views of the city and surrounding landscape, event spaces and interactive exhibits as well as the slide, which OUE described as a "thrill experience unlike any other".

Glass viewing platforms at tall buildings are popular with thrill-seeking tourists around the world.

In 2014, the owners of an observation deck on the 94th storey of Chicago's John Hancock Center considered adding a tilting glass box.

Later that year at the city's Willis Tower, the glazed ledge attraction had to be temporarily closed after it cracked under visitors' feet.