It features exhibitions dedicated to key events in the state's history of women's rights, civil rights, the abolition of slavery, as well as the recent progress of the local LGBTQQ (lesbian, gay, bisexual, transgender, questioning, queer) community.

nArchitects' design for the 7,500-square-foot (697-square-metre) building comprises three, one-storey volumes. Two of these house the exhibition spaces and a gift shop, while the third serves administrative purposes.

The studio chose the red brickwork exterior to match the materiality of nearby buildings in Auburn.

The varying orientations of the volumes are arranged to offers views of surrounding landmarks in the city. Inside, large windows capture vistas of Westminster Church, the historic town hall, and Seward House Museum – another historical site in Auburn.

"In this way the immediate context is integrated with the exhibition content," said the firm. The interstitial spaces between these volumes also creates small courtyards that are available for public use.

Inside, the main structure is made of concrete, with deep wooden beams supporting the roof.

Each of the exhibition areas contains a central volume for service functions such as the reception desk, bathrooms, or utilities. This creates a circulation path around a central feature, before heading to the next room.

The permanent exhibition was designed in collaboration with New York City-based design studio MTWTF. It contains elements to engage visitors such as videos, games, and interactive installations.

"One of these elements – the Social Justice Table – brings people together around a circular video display highlighting legislative milestones," the architects said.

Other similar moments are provided by a circular bench with booth-like seating that contains an audio installation.

Roughly in the centre of New York state, Auburn was for many years the home of Hariet Tubman, an abolitionist, suffragette, and civil rights hero. After being born into slavery and escaping, Tubman made several trips to bring freed slaves north to Canada.

A statue in her effigy by Brian Hanlon stands at the eastern side of the roughly triangular site. It is set front of a new public plaza opposite Aurburn's City Hall and forms the main pedestrian access to the Equal Rights Heritage Center.

"Landscaping surrounding the building was designed with an aim to provide a significant new public green space for downtown Auburn," nArchitects said.

nArchitects' other cultural and public projects include the conversion of a Greenpoint warehouse into the creative space A/D/O, and an undulating pier in Chicago that was designed in partnership with James Corner Field Operations.

Photography is by James Ewing, unless otherwise indicated. 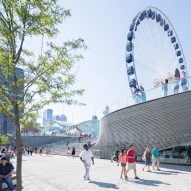