Young Belgian studio Atelier Janda Vanderghote has transformed the interior of one of Ghent's historic houses with a new concrete frame and brilliant blue furniture.

Located near Ghent's Citadelpark, B&B Entrenous was designed by Atelier Janda Vanderghote for a family who wanted to create a unique private residence and a three-bedroom guest house.

The area is known for its older buildings, mostly in the classical style, and the existing house was protected by the city, which required that the architects work with the original interior layout.

They decided to restore the original facade and create a new internal concrete structure to create the additional spaces required inside while still respecting the original interior plan.

"At first it was difficult to implement this obligation to respect this layout, but from the moment we decided to use this as a design tool for the rest of the building, it started to give a natural feel and ease to the resulting plans," Atelier Janda Vanderghote co-founder Indra Janda told Dezeen.

The house is divided into private spaces for the owners and more public spaces to be shared with the guests. 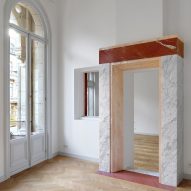 The owner's living room, kitchen and dining room are located on the ground floor, alongside rooms for services, with a glass facade overlooking the garden at the rear.

The third floor at the top of the house contains two bedrooms, two bathrooms and also has a small roof terrace for the owner.

The first and second floors are predominantly used for guests, with the lower-level housing a dining area and small kitchen that opens out onto a larger roof terrace, as well as a reading area and a sauna. Three guest bedrooms with en-suite bathrooms are contained on the second floor.

"The private and public functions are interwoven intensively within the building without creating a hard boundary," said the architects.

Through most of the house, the cast-concrete frame is left exposed and raw. This is contrasted with polished concrete floors, with a terrazzo-like effect in the more public areas, and smoked-oak wooden flooring in the more private spaces.

A streak of brilliant blue runs through the house in the fitted furniture, including the railings of the dark oak staircase.

"The concrete structure was very important for us, not only as it shows the old lines and so the history of the building, but also as a real robust material without any after-treatment as an contrast to the polished concrete floors, the plastered old facade, and the refined blue furniture that was placed to complete the spaces," explained Vanderghote.

"The furniture was drawn as a blue cloak that wraps itself through the house and ties everything together," she added. "The blue was chosen to perfectly complement the other materials."

Afzelia doussie, an African wood, was used for the windows and door frames and other external joinery. At the rear, different widths of the wood were whitewashed or painted white to create railings that could accentuate the height of the house.

Belgium has become known for its proliferation of small and medium-sized architecture firms in recent years. The small country had the second highest number of projects on the Mies van der Rohe Prize nominations list for 2019. The bi-annual prize recognises the best new architecture in Europe.

Other Belgian projects on the list included the transformation of a trio of historic buildings in Antwerp by Bovenbouw and the Ryhove Urban Factory by TRANS, which also made it to the shortlist.