OMA's stair connects the ground, first and lower levels of Saks Fifth Avenue and creates a diamond-shaped atrium, with the first floor visible from the ground level.

The glass panels that form the escalator railings and balustrade of the stair are coated with an iridescent dichroic film. This means the glass changes colour when viewed from different angles in the flagship, located at 611 5th Avenue in Midtown Manhattan.

The escalator forms part of a wider overhaul of Saks Fifth Avenue – which global architecture firm Gensler designed in collaboration with Saks' Store Planning and Design team – and was added during the renovation and reconfiguration of the main level.

This involved moving the beauty and jewellery departments to the floor above and introducing a handbag and leather goods area at grade. The latter is now triple the size of the original provision and intended to reinforce Saks' "position as a fashion authority with an exceptional offering".

Finishing the new interiors of this main floor are origami-like folded metal tables, and glass fixtures fitted with two-way mirrors for displaying products.

Floors are covered in custom terrazzo made in Italy, which is also used to form podiums for displays alongside white stone structures. Other details include a 600-square-foot (56-square-metre) area dedicated to installations.

Saks Fifth Avenue is being updated in phases. Past upgrades have included the renovation of the first level, which was completed in May last year, and the overhaul of levels three and five in 2017. 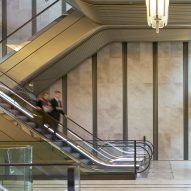 Two additional phases are set to debut later this year: the Vault, which will be a subterranean area for jewellery, and the men's section.

A number of stores have been updated with statement staircases. Harrods in London, for example, features a dualistic stair clad with nickel bronze designed by Make and a white marble staircase by Rundell Associates.

Other retail stair designs include a golden stairwell at Dolce & Gabbana in Tokyo by Gwenael Nicolas, and Steven Harris Architects' spiral white staircase at the Barney's store in New York City.

OMA, which was founded in 1975 by Dutch architect Rem Koolhaas, has also completed two other department stores recently: T Fondaco dei Tedeschi in Venice and KaDeWe in Berlin.