High Meadow Studio will be used as a hub for the Fallingwater Institute's architecture, art and design programmes, which take place at the Pennsylvania landmark each year. The building is located a short walk from the cabins that accommodate participants, which Bohlin Cywinski Jackson completed in 2017.

The firm has now renovated and extended an outbuilding on the estate, which was already used as a studio for the students, to create a more spacious facility.

"The garage's size limited the programme's capacity, while the lack of natural daylight, views, and ventilation disconnected the space from the adjacent meadow," said a project description. 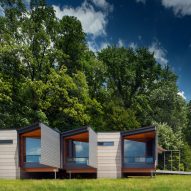 The team doubled the garage's existing footprint, adding spaces for fabrication, reviews, storage and other services. A new outdoor work area is intended to strengthen the connection to the rural setting.

Repurposing the old building as a workshop involved re-skinning its timber frame, and adding translucent double doors to let in diffused light.

The addition on the side deepest into the forest has a fully translucent north wall, and a full-length surface for pinning work to the south. A single window overlooks the porch and the trees beyond.

Between this studio space and the workshop, a pair of red-stained plywood volumes house the ancillary functions.

To keep the building naturally ventilated, operable roof vents draw air up from the underneath. Screens allow doors and windows to be left open without letting in insects.

Fallingwater is considered one of the most important works by American modernist Wright, who designed the private house for Edgar Kaufmann in 1935. Built over a waterfall and extending into the surrounding trees, the home is praised for its integration with nature. 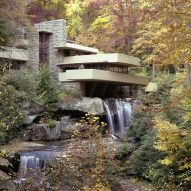 The building has been in the care of the Western Pennsylvania Conservancy since 1963, and the summer residency programme has taken place since 2012.

Bohlin Cywinski Jackson has completed several projects for the conservancy, including the adaptive reuse of an 1870s barn on the Fallingwater site in 2006 to create a space for lectures, exhibitions and other events.

Fallingwater is one of eight Wright buildings nominated for UNESCO's World Heritage List, along with the Guggenheim Museum in New York and the Robie House in Illinois.