The firm was enlisted to return to the project to make more space for customers and extend the facilities, as the coffee shop has become popular since opening.

"Although it is not necessarily our instinct to revisit a recently completed project so soon, one thing that has made the collaboration between us and Blue Bottle so rewarding is their constant drive to refine and perfect what they are doing," said Bohlin Cywinski Jackson.

Located on the corner of Berry Street and North 4 Street, the coffee shop features interiors intended to riff of the details of the former industrial space, such as concrete floors and exposed brick walls painted white.

Slatted woodwork fronts a coffee bar and counter and matches the wooden tables that furnish the cafe.

For the redesign, Bohlin Cywinski Jackson kept much of the project the same, including the wood detail that wraps around the walls.

The existing concrete floors have been sealed for better wear. 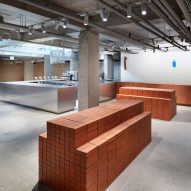 The practice also updated some of the furniture. Two long tables replace a communal table, and a curvilinear wood bar has been added near the counter where a smaller version previously stood.

The kitchen was also upgraded during the renovation, allowing the Blue Bottle Coffee shop to expand its food and drink offerings.

"The bulk of the update happened in the back of house and is not visible to customers," the firm said.

The 2,170-square-foot (201-square-metre) cafe is the latest that Bohlin Cywinski Jackson has designed for Blue Bottle Coffee, which has expanded to almost 100 outposts around the world since it was founded in the early-2000s.

Others include San Francisco cafe with similar pale wood interiors, as well locations in Boston, Miami and Washington DC.

"Our designs focus on the experience of coffee making and interaction with the barista: stores are uncluttered and all operations are in full sight, so that the 'performance' of making coffee is front-and-centre," said the firm.

Bohlin Cywinski Jackson, which was founded in 1965 by Peter Bohlin and Richard Powell, is also behind a number of other projects in Williamsburg, such as the Apple store on Bedford Avenue and a clothing store for Everlane.

Other Blue Bottle Coffee locations are a cafe in Seoul and one in Tokyo, both by Japanese studio Schemata Architects.

Photography is by Daniel Lee.