There's room for work, rest and play inside software company Grammarly's office in Kyiv, which includes its own conference hall, nap pods, and a soundproof music room.

The office occupies the top two floors of a 14-storey building in Kyiv and has been designed by locally-based architects Balbek Bureau to accommodate the growing workforce of Grammarly.

Founded in 2009, Grammarly is computer software that helps users check their online written content for spelling, grammar and plagiarism in real time. The company was founded in Kyiv, where it has moved into this larger office, and has bases in San Francisco and New York.

The company wanted its Ukrainian headquarters to boast a number of versatile spaces that would suit various styles of work and office activities. Balbek Bureau has thus arranged the 1,300 square-metre lower level to include large, glass-fronted boardrooms, open desks, and a central conference hall complete with a speaker podium.

Several of the office's nooks have also been dressed with armchairs or beanbag-style seats where staff can lounge or have informal meetings. Should employees want privacy or quiet time for work, they can head to smaller box rooms that have been created to host just one or two people.

Recreational areas at this level include a canteen, library, and a soundproof room that can be used to watch videos or play musical instruments. 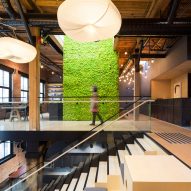 Surfaces throughout have been painted warm shades like blush pink, teal blue, or butter yellow to foster a more inviting atmosphere. Some partition walls are also clad in planks of natural oak wood and fronted with greenery-filled planters.

White staircases lead up to the 450 square-metre mezzanine level, which plays host to more relaxed work areas connected via a 90 metre-long winding walkway.

Made from 25 tonnes of metal, the walkway has no ground support but is instead suspended from the ceiling by slim poles.

"It unites various functional zones of the office into a single life cycle or rhythm," explained the studio.

"It has also become a powerful symbol of the inseparable connection between Grammarly offices in Kyiv, New York, and San Francisco."

Upstairs also has a cosy seating zone centred by a firepit, and a handful of boxy volumes that serve as nap rooms.

A weight sensor has been fitted underneath each of the mattresses so that as soon as an employee lies down, a sleep symbol of three Zs is illuminated and lets others know that the space is occupied.

Photography is by Andrey Bezuglov and Yevhenii Avramenko.